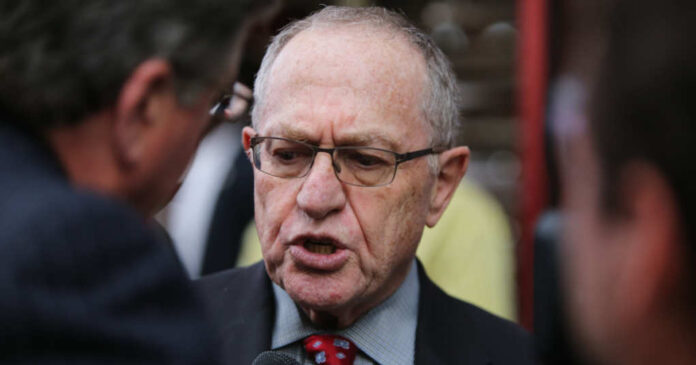 The name Jeffrey Epstein has become synonymous with illegal activity. Any person who finds their name attached to a sex addict immediately falls into a category of people with whom most would never want to have their name associated. Epstein was a man that ran an illegal sex trafficking ring for his so-called business clients. He would load up his clients on an aircraft and let them have their way with petite girls.

The sick man was finally arrested and charged with federal sex trafficking crimes. He was put in a private jail cell where he was put under constant watch in the case; he tried to do anything to himself. But on August 10, 2019, the man was killed in his jail cell, apparently from suicide. But the stigma of his name and its association lives on, as Alan Dershowitz would soon find out.

Dershowitz is a law professor invited to appear on HillTV’s “Rising.” The program wanted to help the man promote a new book that he finally got published. His new book is called “The Price of Principle: Why Integrity Is Worth the Consequences.” His book appears to talk about having a form of ethics, but his association with Jeffrey Epstein would prove to be a factor in how he would respond to questions from the program’s hosts.

Dershowitz was questioned about his relationship with a man that was known for using small young girls to provide entertainment for his clients. Once Epstein’s name was mentioned in the same sentence as Dershowitz was the moment that everything changed during the interview.

HillTV had found out that late in 2000, Dershowitz’s wife had scheduled a time block to have a massage done. The massage was scheduled to take place in the presence of Jeffrey Epstein.

The question about the massage was just enough to set Dershowitz into a panic.

The name Epstein is known for sex crimes against young girls. Any person whose name is thrown into the mix is thought to have been involved in the heinous acts of sex trafficking.

The angry old man exclaimed, “If you think my wife scheduled a massage with an underage sex slave, then you’ll believe anything.” The author had to fire back that the massage for his wife had nothing to do with Epstein’s crimes. But the fact that he thought the show hosts were linking his wife to taking advantage of young girls causes a lot of suspicions that he was involved in using Epstein’s sex services.

In a rage, Dershowitz admitted that he also had a massage in Epstein’s private home by a woman he had never met. Epstein had women around all the time to meet the needs of those who came over for a visit.

The author’s anger continues to mount as he accuses the hosts of putting him on trial. He accused them of making charges against him and claimed he was innocent. But all the show hosts did was ask about his wife scheduling a massage with Epstein’s services.

Dershowitz’s quick response led him to admit that he had experience in Epstein’s presence. He may have complained about the massage he received from a woman he never, but he never once reported the matter to the police or an appropriate agency. All he did was look the other way and leave the women under the control of a known sex trafficker.