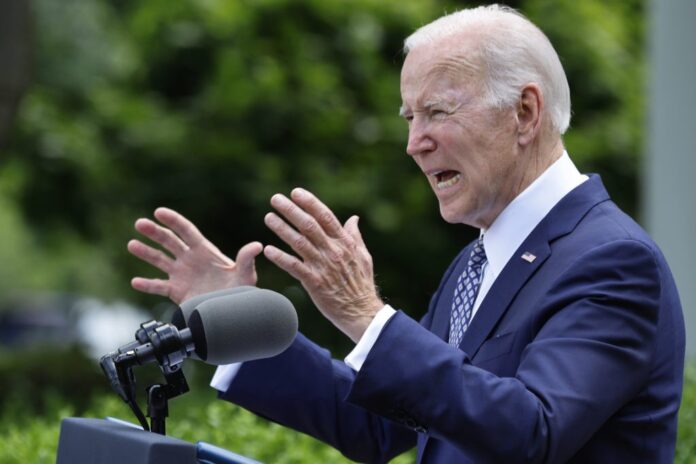 Biden spoke at a Labor Day event in Milwaukee, Wisconsin, celebrating unions and warning workers about the dangers that “MAGA Republicans” posed to the working class.

During his speech, a man stood up and began shouting, but it was unclear what he was saying.

Biden tried to calm his supporters, as Secret Service removed the heckler from the event.

The president continued his speech, warning his audience that the “extreme MAGA” Republicans were trying to take away personal rights from Americans.

“We have to be stronger and more determined and more committed to saving American democracy than the MAGA Republicans and that guy out that door, are destroying democracy,” he said, referring to the heckler.

Biden continued his angry condemnation of former President Donald Trump and his supporters, calling them a “threat to democracy.”

He also told workers that “the Trumpies” were trying to end popular programs such as Social Security.

President Joe Biden speaks to a gathering of union workers at Laborfest on September 05, 2022 in Milwaukee, Wisconsin. (Scott Olson/Getty Images)

Biden’s bizarre claim is based on a proposal by the Senate Republican committee to make every federal program reauthorized by Congress every five years.

Democrats have tried to use the proposal to warn voters, as they try to do every election cycle, that Republicans want to end Social Security.

Sen. Mitch McConnell (R-KY) has specifically clarified that ending Social Security or Medicare “will not be part of a Republican Senate majority agenda,” if Republicans take the majority this fall.

Biden thanked union workers for their contributions to the United States of America, crediting their support for his entire political career.

“The bad news for you all is that I’m here because of you,” he said.

The president even singled out a child in the crowd for attending his speech.

“Any child under 12 years of age deserves a little extra ice cream or something for doing this,” he said as the crowd chuckled. “This has got to be the most boring thing in the world for you honey but we’re going to work something out for you I promise.”