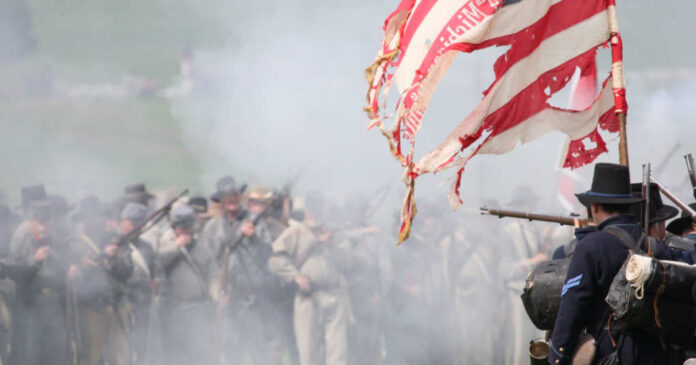 The Democrats seem to want a more progressive agenda. Some are even leaning toward out-and-out socialism. Meanwhile, the Republicans are trying to take a conservative, fiscally minded approach to governing the country.

There are arguments coming from both sides on virtually every issue.

Parents should or shouldn’t get a say in their children’s education.

Abortion should or shouldn’t be allowed all the way until the third trimester.

Student loans should or shouldn’t be forgiven.

Transgender individuals should or shouldn’t be given the same rights as the gender they claim to be.

Black Americans should or shouldn’t be given restitution due to the slavery issues from a century ago.

The list of issues that divide us as a country go on and on. And it’s tearing us apart with every election – and even with every speech given by President Biden.

Is the only way to move forward as a country with a civil war? It would be the red states versus the blue states – and it may even end up with two countries by the end of the war.

It would be a lot of bloodshed just to ensure that voices are heard. Is it really possible, though? Could the U.S. end up facing a civil war? More Americans believe that is the way that we are headed.

The Guardian recently reported on a survey that identified that more than two-fifths of Americans anticipate a civil war will take place within the next 10 years. And for those who identify as “strong Republicans,” that number goes even higher.

As you look at rhetoric on social media from supporters of Donald Trump as well as research conducted by The Economist, it seems that a civil war is a legitimate possibility. There are simply too many issues where Americans are at polar ends.

If Trump is indicted for retaining classified documents following the raid of his private home by the FBI, it’s going to lead to more and more people questioning the legitimacy of the FBI. Many will believe that Joe Biden is conducting a witch hunt to get rid of his opposition in 2024. And it may be hard to unite the country after that.

Senator Lindsey Graham of South Carolina went as far as to predict that there would be “riots in the streets” if there’s an indictment.

As if to make matters worse, many liberals rebuked Graham. Mary McCord, a former acting deputy attorney general, even told CNN that it was “incredibly irresponsible for an elected official to basically make veiled threats of violence, just if law enforcement and the Department of Justice…does their job.”

Hmmm, but that’s a double standard, isn’t it?

After all, Kamala Harris talked of rioting in the streets if the Supreme Court didn’t uphold Roe v. Wade.

Joe Biden even went as far as calling those who support MAGA semi-fascists.

How is it that liberal politicians have the right to say whatever they want, yet conservative ones are constantly being rebuked for speaking out?

McCord continued on in her CNN interview, only proving that there’s a double standard. She spoke of how “people actually mobilize and do things” when they hear politicians talk about being angry and how people may become violent.

Yep. And that’s why there were so many riots happening throughout the summer of 2020 after the death of George Floyd. There were violent riots across the country – and Kamala Harris was only promoting the violence by starting a fund that would allow those charged to get free bail. Wasn’t that basically encouraging people to mobilize and rise up against the government?

Oh, but we’re not supposed to talk about any of that. Only those with a progressive agenda are allowed to rise up.

Yeah, it definitely seems that a civil war may be in our country’s future. It may be the only way to settle the double standard once and for all.