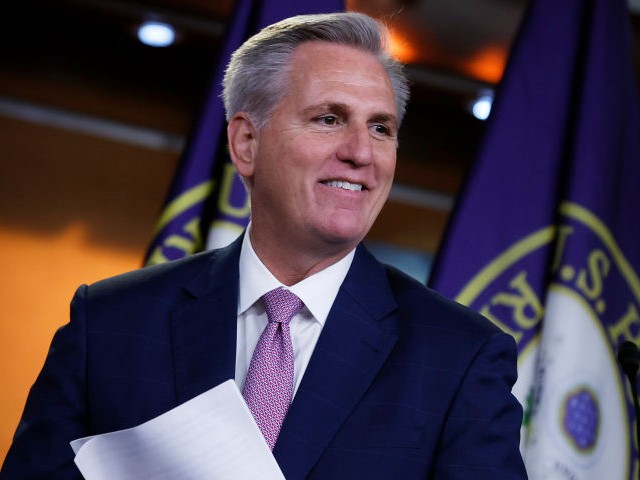 Announced earlier in the year, McCarthy’s “Commitment to America” will be officially unveiled on September 19 in Pittsburgh. The vision is similar to House Republicans’ 1994 “Contract with America,” where the GOP saw massive gains in Congress in the midterm election during former President Bill Clinton’s first term.

McCarthy’s agenda has four focal points: “an economy that’s strong,” “a nation that’s safe,” “a future that’s free,” and “a government that’s accountable.” The “Commitment to America” is a result of collaboration from all GOP House members, not just Republican leadership.

“I’ve had a piece of putting this together. You’ll have everybody from the most conservative district to the most swingiest district all pushing the same thing. So that should fire everybody up,” Rep. Andrew Garbarino (R-NY) told Axios.

The agenda represents “what we want to get done in the first hundred days” and hopes to show voters that “we’re planning now so we can hit the ground running on January 3,” Garbarino said.

The agenda also calls for “a hold on federal funds for local prosecutors and woke district attorneys who refuse to prosecute crimes.”

On national security, House Republicans plan to hold the Biden administration accountable for its “catastrophic” withdrawal from Afghanistan.

The “Commitment to America’s” accountability pillar promises House Republicans would “use all tools at our disposal to pursue the truth, root out corruption and abuse of power, and provide transparency to the American people on the issues that matter most.”

As part of the “Commitment to America,” McCarthy is encouraging Republican members of Congress to go into their districts and hold conversations about the four-part agenda with their constituents.

McCarthy’s midterm approach is vastly different than that of Republican Senate Leader Mitch McConnell (R-KY). Instead of providing voters with a pro-Republican agenda, McConnell would rather see GOP candidates run on an explicit anti-Biden and anti-Democrat platform.

For example, McConnell spoke out against Sen. Rick Scott (R-FL) when he published his “11-Point Plan to Rescue America” earlier in the year.

However, some Republican members of Congress believe McConnell’s anti-Biden strategy is not enough to court voters.

“If you’re just running on anti-Biden, well, that’s not going to get you over the finish line,” Rep. Don Bacon (R-NE) told Axios.