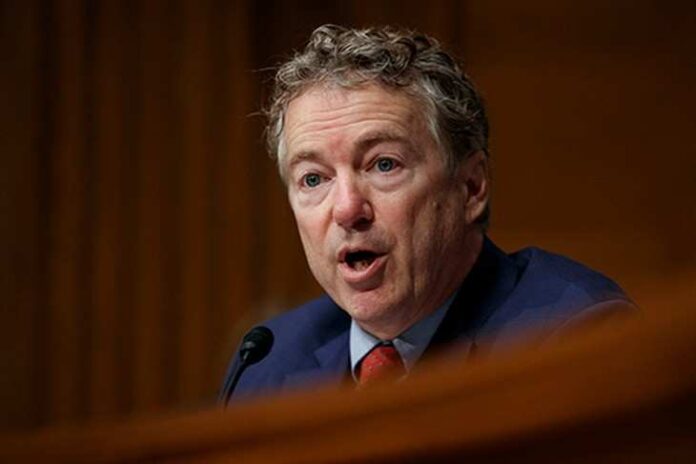 Senator Rand Paul’s Kentucky home was under attack this past Monday, as an envelope full of white powder arrived on the premises. The FBI and Capitol Hill police were summoned for a full investigation, as they are going to be looking for any and all harmful substances that are involved.

The package is also said to have contained a death threat against Paul. How can this possibly be tolerated? Singer Richard Marx, who is about as low on the rung as celebrities can be, decided that he needed to chime in about this. Twitter is a site that is built on chiming in but the timing of this post struck as being mighty suspicious.

You would be forgiven for never having heard of this guy but he wanted his little 15 minutes of fame and now he’s got it. “I’ll say it again: If I ever meet Rand Paul’s neighbor I’m going to hug him and buy him as many drinks as he can consume,” he tweeted. The day after he made his little joke, the suspicious package made its way to the home of Rand Paul.

That’s a bigger coincidence than we can handle. To be fair, there is probably no real connection here but it’s also hard for us to ignore the obvious signs. If we had to guess, he was talking about the crazy neighbor of Paul’s who lost their temper and attacked him in the middle of their yard. Paul was badly injured during the attack and he was lucky to survive.

To call this joke tasteless is an understatement but that’s how the liberals roll. They do not care about the welfare of anyone else. The left pretends that they are all about peace but in reality, they are as violent as they come. If someone dies or is injured (and they are identified to be conservative), it is open season to laugh about their misfortune.

So, you’re a cheerleader for felony assault that resulted in six broken ribs, 3 displace ,multiple pneumonias and part of a lung being removed?

You see, when they are attacked in any way, shape or form, it is a national tragedy and it has to be treated as such. If they are the ones who decide to attack people? It’s totally different. “So, you’re a cheerleader for felony assault that resulted in six broken ribs, 3 displaced ribs, multiple pneumonias and part of a lung being removed?” asked Rand Paul’s chief strategist.

You see, Johnny-Bob…unlike your hero/führer now residing down at MaraLoco, I never incited nor even suggested anyone be violent. Certainly not towards the traitor known as Rand Paul. I’m just saying that the fact someone slugged him doesn’t break my heart. https://t.co/uZTZ522KES

This is a question that was not posed directly to the Z list celebrity but it could have been directed at any of the leftists who sat around giggling over this. So did the overlords of Twitter get all worried about this one, too? They claim that they are super worried about violence on the app. Trump was kicked off for this very reason.

Of course, Marx’s tweet was fine. The official company line is that “a review found Marx’s tweet was not in violation of the company’s policies.” Go ahead and put your surprised face on. We know that this one is going to come as a huge shocker to you.

Whenever someone makes a joke about the POS traitor who voted against health care for 911 first responders getting his ass kicked, Twitter MAGAts like this who defend an attack on our Capitol which left 5 dead clutch their pearls. It’s reprehensible AND hypocritical as fuck. https://t.co/4Mk3DOMCDr

This isn’t the only hostile tweet that Paul has been on the receiving end of. “Whenever someone makes a joke about the POS traitor who voted against health care for 911 first responders getting his ass kicked, Twitter MAGAts like this who defend an attack on our Capitol which left 5 dead clutch their pearls. It’s reprehensible AND hypocritical as f—,” said Marx. The use of “maggot” is a pretty nice touch, we can’t lie.

As for Paul himself, he is taking this threat with the appropriate level of seriousness. “I take these threats immensely seriously,” Paul said in a written statement. “As a repeated target of violence, it is reprehensible that Twitter allows C-list celebrities to encourage violence against me and my family. Just this weekend Richard Marx called for violence against me and now we receive this powder-filled letter.” In the meantime, let’s ignore all of the dispatches from failed ’80s singers.