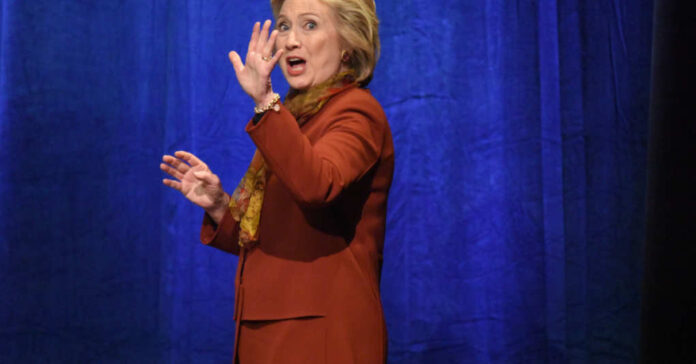 Oh no, Hillary is in a tizzy again because of former President Donald Trump. She is all worked up because of how many people are connecting the raid on Trump’s Mar-a-Lago residence and the FBI seizure of classified documents with the situation involving her emails on a private server.

People are asking why there is such a vast difference in the way the two situations were handled.

There was no raid on Hillary Clinton, even though she was responsible for the destruction of emails that were under subpoena and her staff was known to smash their Blackberrys.

Hillary is upset because of the renewed focus on what she did and how she basically got a “pass” from the FBI.
So Clinton is once again in the defense mode, claiming on her Twitter account that she did not have any classified material on her private server. She started by saying, “I can’t believe we’re still talking about this, but my emails…”

She then doubles down by saying that zero emails were classified on her service and that FBI Director James Comey admitted that he was wrong after he claimed there were classified documents in question.

Not leaving well enough alone, Clinton when on to tweet that Trump’s own State Department, under separate Secretaries, found that she had no classified emails.

Clinton huffed that she was “more tired” of talking about this than anyone. But then she tweeted again, saying that if people were interested, they could read an attached article.

I can’t believe we’re still talking about this, but my emails…

As Trump’s problems continue to mount, the right is trying to make this about me again. There’s even a “Clinton Standard.”

The fact is that I had zero emails that were classified.

Believe it or not, Clinton cites an article written by the guy that previously wrote about the “vast rightwing conspiracy” against her. And in the new article, he does not have a single citation for the claims he makes about classified documents.

Well, if you are interested, you should take a look at what James Comey did say in his official statement when they decided not to prosecute her.

Comey went on to say that “any reasonable person in Secretary Clinton’s position, or in the position of those government employees…should have known that an unclassified system was no place for that conversation.”

He went on to say that none of the emails should have been on any kind of unclassified system. And the presence of Clinton’s emails was “especially concerning” because all of them were housed on “unclassified personal servers not even supported by full-time security staff, like those found at Departments and Agencies of the U.S. Government—or even with a commercial service like Gmail.”

Comey contradicted their claims of Hillary under oath in front of Congress on July 7, 2016.

Rep. Trey Gowdy, R-S.C told Comey that Clinton said there was nothing marked classified on her emails, and he asked Comey if that was true.
Comey responded that it was not true.

Clinton is not just trying to run from the truth again, she even tried to raise money based on the Trump raid. Clinton is still obsessed with her loss in the 2016 election. She just can’t fathom how it happened against Donald Trump. So she is willing to go to any length to try and rise from those ashes, even disregarding the truth.