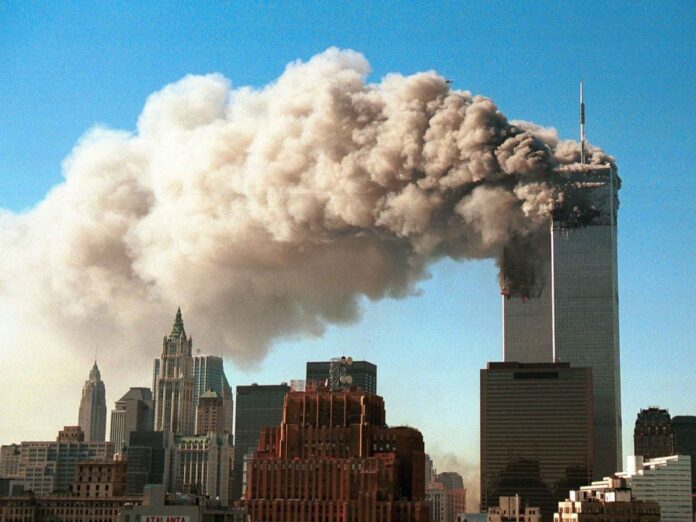 In total, all 19 terrorists arrived legally in the U.S. as 16 secured tourist visas and three obtained business and student visas. Eventually, on September 11, the terrorists executed attacks in New York City, New York, Washington, DC, and Pennsylvania that killed 2,977 Americans and have since left thousands more Americans dead with illnesses related to the attacks.

Seven of the 19 terrorists overstayed their visas either before the attacks or at the time of the attacks. Despite U.S. immigration law requiring their detainment and potential deportation, none were detained or deported.

The seven terrorists who overstayed their visas include:

Nawaf al-Hamzi arrived back in the U.S. in 2001 and lived in New York for just a couple months before hijacking American Airlines Flight 77 and flying the plane into the Pentagon. A month before the 9/11 attacks, Nawaf al-Hamzi was placed on a terrorist watch list. He should have been deported nine months before the attack, as he had overstayed his visa.

Mohamed Atta — who hijacked American Airlines Flight 11 and flew the plane into the World Trade Center’s North Tower — had overstayed his visa as of December 2000, but was not deported at the time. Atta was able to obtain a Florida driver’s license despite being arrested months before for driving without a license.

Atta’s name appeared on a terrorist watch list in January 2001 and he was detained in the United Arab Emirates before returning to the U.S. to carry out the 9/11 attacks.

Hani Hasan Hanjour, the terrorist pilot of American Airlines Flight 77 that was flown into the Pentagon, was considered an illegal alien at the time of the 9/11 attacks, as he did not enroll in school despite obtaining a student visa in September of 2000.

Satam al-Suqami and Waleed al-Shehri, likewise, had overstayed their visas in the U.S. before aiding in the Flight 11 hijacking and Twin Towers terrorist attack.

Marwan al-Shehhi — the terrorist responsible for flying United Airlines Flight 175 into the World Trade Center’s South Tower — took at least three trips out of the U.S. and back to the country despite having overstayed his visa as of November 2000. Al-Shehhi was also able to obtain a Florida driver’s license.

Ahmed al-Ghamdi, one of the Flight 175 hijackers, was in the U.S. illegally, as he had overstayed his visa but was never deported, allowing him to hijack the flight and aid in flying the plane into the South Tower in Manhattan.

Today, that visa overstay loophole used by seven of the 9/11 terrorists remains wide open and even larger than decades ago. In the Department of Homeland Security’s (DHS) latest report on the loophole, officials revealed that nearly 685,000 illegal aliens are in the U.S. after overstaying their visas.

DHS continues to have little-to-no resources for deporting visa overstays despite the 9/11 Commission calling for a rigorous biometric entry/exit system to track all visa-holders in the U.S. and whether or not they have left the country at their required date of departure.

William Gheen’s Americans for Legal Immigration (ALIPAC) was formed 18 years ago, just a few years after the 9/11 attacks, to fight illegal loopholes such as visa overstays.

In a statement, Dan Stein with the Federation for American Immigration Reform (FAIR) said, “It is important to note that the Biden administration has forgotten nearly every lesson learned on that tragic day.”

“By loosening immigration inspections, border controls, document security, interior enforcement, and screening standards, America is no longer secure,” Stein said. “The threat of state-sponsored radical Islamic terrorism is still a very clear and present danger, as we have been reminded in just the last few months.”

About half of all the nation’s 11 million to 22 million illegal aliens arrive on visas but eventually overstay. The majority are never deported.