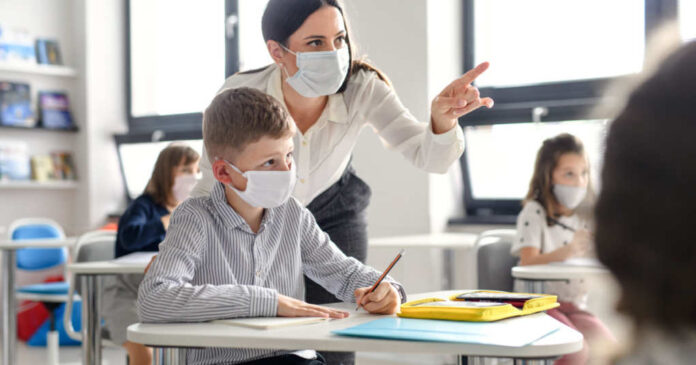 The liberal forced pandemic lives on in academic circles around the country. Liberal institutions continue to believe and push that the COVID-19 virus continues to be a significant threat. Several institutions still have rules in place that severely limits what students can do when they arrive on campus. And as soon as one case of the virus shows, the liberals go into an all-out panic and lock everything down.

The unsolicited power that the liberals have on campus also makes life miserable for students inside the classroom. Drew Morton is a Texas A&M. He teaches film history while worrying about his health and what the students bring into his classroom.

His wacky idea aligns with what fake doctor Anthony Fauci claims needs to happen in classrooms around the country. He maintains that masking should be forced on all students, whether they like it.

But Morton is taking it one step further and allowing students who wear a mask all school semester long to gain extra credit towards their final grade. He put in his class syllabus that students can earn that extra credit by wearing a surgical mask properly. The catch is that every student has to comply with the deal.

RedState reported that he wrote in the syllabus that “This face-to-face course focuses on the historical development of cinema in America from the 1890s to the contemporary period. Students will study the technology, the industrial structures, the personnel, and the films that have marked the evolution of film from silent shorts, through the rise and fall of the Hollywood studio system, to the period of conglomeration and convergence that currently defines the industry.”

Morton is using peer pressure to get what he wants in class: to see every student mask up whether they want to. Morton stated that if everyone in the class complies with the deal, he will add 15 percent to the final grade of every person. The catch is that once a person takes their mask off during class, every person loses that extra percent for the week.

The liberals maintain that the virus is the top killer of college students. And Morton uses that fake story to make his point about forcing people to mask up. He arranged his class grades to be heavy on the tests. A student could fail the class by not wearing a mask if they did not score well enough on the other projects.

Morton’s idea forces students to comply, or everyone will suffer. His class is nothing more than a form of socialism and how it will work should President Joe Biden get his way with America. The Democrats want to force everyone into the same mold. And what one person does will affect everyone else.

Peer pressure can be used to force the holdouts into compliance. The liberals know full well how to use it to their advantage. Students who struggle with getting good grades because of uncontrollable factors will wear the mask for the class hour so they can make the grade while working hard.

Every student must obey the rule, or everyone will miss the extra credit. Morton will end up seeing this option as a double win for himself. He gets to sit in a classroom with masked people, which makes him less exposed to the virus. And on the other hand, he does not get branded as a wacky liberal trying to force his will on everyone else.

RedState reported, “While A&M-Texarkana does not require you to be vaccinated or to wear masks, you are strongly encouraged to do your part to keep our university community safe by getting vaccinated, wearing a mask while in public indoor settings, and frequently washing your hands. These actions are known to be effective in reducing the spread of COVID-19.”

The only thing needed to combat a virus is common sense. People that are sick should stay home, and anyone that wants to wear a mask has the freedom to do so. But it should never be forced on anyone else.