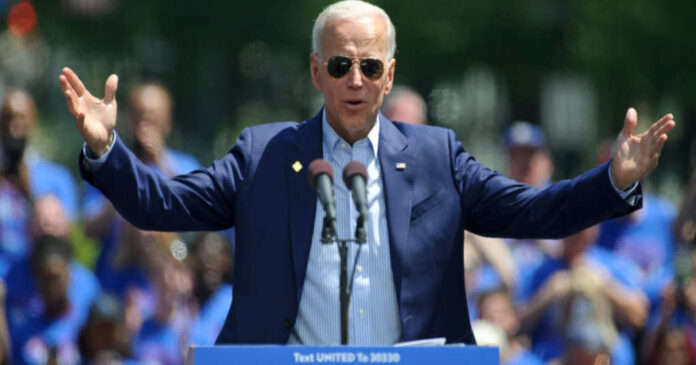 The liberal-owned media is pushing narratives that make it seem like the Democratic Party is countering the Republican influence mounting around the country. The invasive news reports make conservatives out to be terrorists and the liberals to be heroes. They try to make President Joe Biden look like a saint even though he sits in his office without ever knowing what is happening around him.

The real threat to the sovereignty of the country is the Democratic Party. They are led by a man that seeks to divide the country and return it to a time when segregation was the usual way of life. But this time around, white people will suffer at the hand of everyone liberal who still feels victimized after two hundred years.

The biggest betrayal from Joe Biden is the sad way he took a prosperous country and turned it into a financial nightmare. The old man was handed a prosperous and growing economy. People had jobs, and businesses were well-staffed with people that wanted to work.

The president took over the White House and singlehandedly struck down every prosperous policy left by his predecessor because a Republican implemented it. He could not fathom having to give credit to a man that made America great again and was the favorite president ever to sit in the White House.

The country had the lowest unemployment rate of all time, and so many jobs were available that the workforce was stretched thin. The inflation rate was at an all-time low, and gas prices were affordable. But along comes Biden, and things take off in the opposite direction because he wants to act like he knows what he is doing.

The current president has a weird fascination with trying to erase former President Donald Trump from the pages of history. His first day in office was filled with signing one executive order after another, reversing every regulation and order that Trump left in place. Each rule change Biden made started the country down a path to destruction and inflated prices.

The victimization of Trump’s support base and relentless attacks on various Republicans has also yielded Biden the title of being a traitor. He puts illegals before his people and actively looks for ways to improve their lives at the expense of tax-paying Americans.

Fox News reported, “Mr. Biden took a booming economy without inflation and turned it into a high-inflation bust in a little more than a year. His war on fossil fuels has driven gasoline, oil, natural gas, and coal prices sky-high — ditto for food prices on grocery shelves. He can’t even get proper baby formula on store shelves. He has spent massively, raised taxes and launched the biggest regulatory assault on business we have ever seen. Real wages for working folks have fallen steadily.”

The president’s claim to fame is that he destroyed America in a year. The old man cares more about an environment that does not need the Democrats messing around with than he does about the people starving because of the higher taxes and lower wages.

Biden is a walking contradiction. He desires to ruin fossil fuel production and replace it with a world powered by batteries. But the issue is that he is unwilling to let people extract the material from the ground needed to produce all the batteries for the cars he wants to force people to buy and drive.

The problem that Joe Biden has is that he hates America. He cannot stand that people have a choice to live free and make something for their lives. He loathes the idea that parents have the final say regarding their children. He even tried to use federal agencies against parents that loved their kids enough to speak up against the terrors in the classrooms coming from liberal maniacs.

Republicans are not the only ones seeking to eliminate Biden and the rest of the smelly Democrats. Many liberals have come to realize how insane the left has become. The midterm elections will be the end of a failed dynasty under Biden.