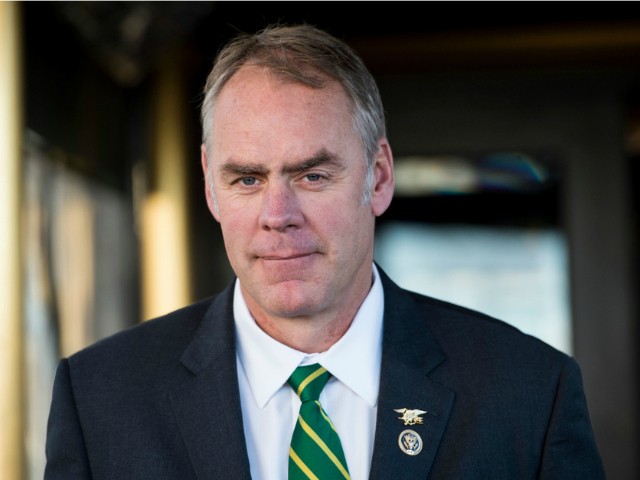 “If you were to describe what a failed nation would look like, we’re living in 3D. We are failing on foreign shores with Afghanistan, Ukraine, possibly Taiwan. We’re failing domestically – energy costs inflation, no border, and we’re failing culturally. The Triad of failure is here, it’s at Biden’s feet, it’s the radicals who want to take over this country and basically destroy our values that have made this country prosperous, strong, united, and free,” Zinke told show host and Breitbart News Washington Bureau Chief Matthew Boyle.

Zinke, who served as interior secretary during the Trump administration, explained why Biden’s energy policies are harmful to the economy and national security, and how his Democrat opponent, Monica Tranel, is wrong to embrace them.

“When I was [interior] secretary, I walked in and we were at 8.3 million barrels of production in a day in crude as a nation and declining. We were held hostage by Saudis. Our supply chain was messed up. After two years, two years of letting America run, we were 12.5 million barrels a day,” he said.

“We were the largest producer of energy. We were exporting energy. Oh, and by the way, we lowered overall emissions. And we had the best safety record in the history of this country. When you let America run. You let America do what it does best. Innovate, think out of the box, produce. No one can touch us. But this administration is all about crushing hydrocarbons. And you can’t make the difference up with fairy dust and hope,” he said.

He added, “We have to have appropriate mix. I’m all for all the above. But it’s got to be affordable. Because energy is the key to that the whole economy. When energy prices go up, fertilizer goes up. That means food goes up. That means delivery costs go up. That means your mining costs go up. And these knuckleheads that think we’re gonna go on batteries. What’s the answer about battery disposal? What’s the answer that 90% of solar cells don’t get recycled? They get thrown in a dump like everything else that adds an enormous amount of toxic materials to it. Now the idea that you’re going to run an economy on fairy dust and hope. You see the results — out of control inflation, out of control prices at the pump. It doesn’t have to be that way. We can do it better,” he said.

Zinke went on to discuss the limits of green energy:

There are limitations on solar cells. There’s limitations on wind. There is limitations on energy production. I’m a big advocate of nuclear power. Over the period of time we’ve seen technology improving. I was in the Navy as a Navy SEAL for 23 years. I’ve been around a lot of submarines, and they are wonderfully safe. They’re small. They have nuclear facilities on a submarine. You know, we can take that model, you know, roll it over.

So then fast forward to solar cells to the components that make up the wind farms, a lot of that is coming from China and China as the market share on processing of course, cobalt, you know, if you look at the Democratic Republic of Congo, you know, hiring kids to put rocks on their back to mine cobalt. I don’t think it’s a good path forward.

Zinke said his race is a “must-win” seat to help the Republicans win control of the House this November.

“We need five seats. Montana is one of these seats that we need. So this is a must-win seat. I’m going to fill the gap. We’re working hard, but the race is tight. And you know, I face an opponent that is radical left.

“If you look at the ‘Inflation Reduction Act,’ [the] tax bill is coming to those that make $200,000 or less and our private insurance for health insurance is going up,” he said.

“There are five SEALs, five Green Berets, and then combat support guys, EOD, that have significant combat experience. There’s about two dozen, and I can tell you these are warriors coming to Washington,” he said.

“They’re never going to flinch under the Constitution. You can’t harass them. You can’t intimidate them. It’s like bringing two fire teams of warriors to Washington because it’s time to take back the country,” he said.