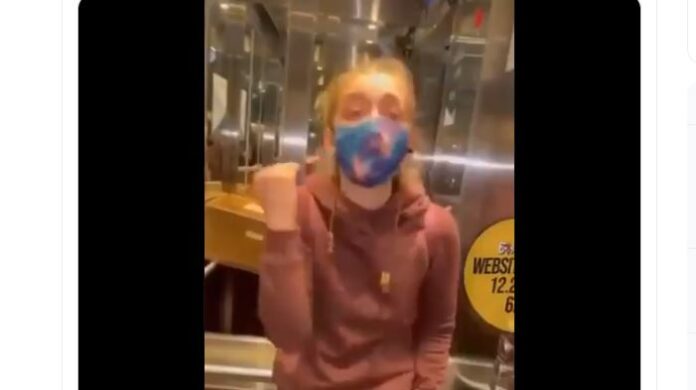 2020 was filled with mask related hysteria and 2021 promises to be no different. Once you take a closer look at this video, you will see just how insane things have become. The lockdowns have had such a horrific impact on American society as a whole. How can they be healthy? According to sources, the national depression rate has at least tripled since the pandemic began.

Elijah Schaffer took direct aim at this phenomenon with a tweet that is sure to have the liberals all kinds of triggered. “Somehow during this “pandemic” mentally ill people feel emboldened to lecture us. It all started with praising people who were mentally confused about basic things like gender. Then we started taking sex change advice from our kids. Now we get this,” he said.

It’s high time that someone said it. The pandemic seems to have turned into an excuse for the liberals to stop caring about the feelings of others. They are the first ones to scream about the importance of empathy but when it comes time for them to put that into practice? They have nothing to say whatsoever.

They simply blame others for the way that they have acted. That’s why this video is so ridiculous (and telling). From the looks of it, the other person’s mask slipped down a little bit. Sure, it’s not ideal when you are in an enclosed space but let’s be real here. We are not seeing anything that looks like any form of malice.

Instead of being kind and understanding, she has a total and complete meltdown. We are not sure how the delivery lady was able to avoid laughing at her. If we were in this situation, we would have been rolling on the ground laughing. It’s been a very long year and we need all of the laughter that we can get.

On the other hand, there are some who are tired of laughing off these liberal antics. People have gotten sick of always having to cater to their demands and listen to their whining. This video should be a hard watch for all of the liberal thinkers out there who feel as if they are the ones who are correct about things.

Then we started taking sex change advice from our kids

Now we get this
pic.twitter.com/YGuM3mh7qu

This is what you all look like to people who aren’t willing to bend their viewpoints to meet yours. There is no give and take with them but they cannot understand why people are getting fed up. The whole “you catch more flies with honey than vinegar” principle is totally and completely lost on them. It’s bullying, plain and simple.

The irony here is that they are the ones who are staunchly against the concept. Anything that serves as an obstacle to them is a form of bullying but when they act like jerks? It’s all supposed to be fair game. To be fair, masks are meant to be worn for protective purposes. On the other hand, what sense is this woman making?

In her mind, it was okay for the delivery person to bring her the food and breathe on it the whole time. Apparently, wearing a mask was supposed to serve as the sole barrier between her and the virus that she is so scared of. This is the logic that the liberals are operating under right now. A magical piece of cloth is supposed to serve as the last line of defense in a scenario where contamination would have happened anyway.

They want masks and shut downs but they still want to enjoy all of their normal creature comforts. It’s a hard mentality to square and that’s why so many conservative thinkers are losing whatever patience that they did have with this stuff. The next time people try to act like things aren’t bad or “the liberals mean well”, we will have the perfect clip to show them. “This is your America, starring the Karen of the week!”