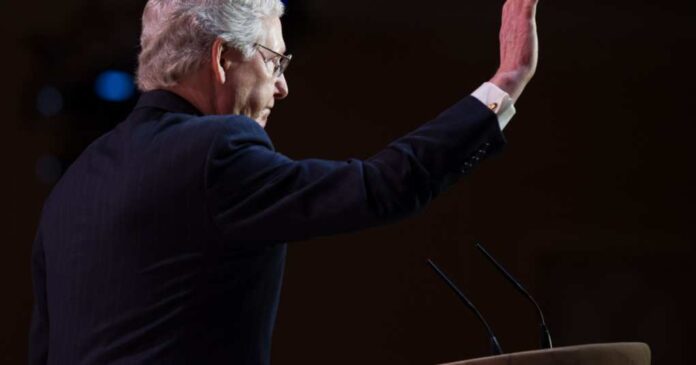 As a leader, you get blamed for everything. If it happened under your watch, it’s your fault. And if you don’t uphold the highest of standards yourself, everything under you gets tainted as wrong.

In politics, the scale of this is even larger and more profound. And it’s also why the Republican Party has found itself in a bit of a bind as of late.

Now, as you know, the midterm election cycle is upon us. In just a couple of months’ time, nearly half of Congress will be either voted out or allowed to keep their seats. This means that now is not the time to be making mistakes. Instead, all I’s must be dotted and t’s crossed. And in a timely fashion, no less.
If not, there will be hell to pay come November.

As you likely have heard, the GOP is expected to make major gains this year, given Biden’s abysmal approval ratings and the many crises that have both begun and allowed to continue during his tenure.
In the House of Representatives, it is pretty much guaranteed at this point that the Republicans will regain the majority and, in doing so, control of the Lower House. The Senate, too, should see a change in the majority, as only one real additional GOP seat is needed.

However, neither could happen if GOP leadership doesn’t hold it together until then. And right now, there are rumors that they are doing anything but.

Most of it results from recent comments made by Senate Minority Leader Mitch McConnell in which he seemed to suggest that “candidate quality” is more of a facet in Senate races than House ones. As you can imagine, the phrasing of it did not go over well, either with House representatives or really anyone.

And that’s precisely why the Democratic Senatorial Campaign Committee flew an airplane banner across the skies Thursday night overhead a big-time Republican fundraising event in Miami that mocked the GOP leader, according to The Hill.

DSCC spokesperson Nora Keefe said in a statement, “Some of Senate Republicans’ worst candidates will be together tonight, so we’re taking the opportunity to highlight how their disqualifying personal and political baggage has raised concerns at the highest levels of the Republican party.”
She added rather sarcastically, “We hope the donors don’t look up.”

The banner read, “Candidate quality has a lot to do with the outcome,” quoting McConnell’s statements made during a Kentucky event last month.

Naturally, this won’t help the rather delicate situation the GOP finds themselves in.
A few recent wins by Democrats, both in Congress with the passing of the Inflation Reduction Act that really has nothing to do with inflation, and in the White House, may have made what might have been a landslide win in most many congressional districts into a much harder fought one for Republicans.

Or at least that’s what fundraising efforts are showing. According to last quarter’s reports, GOP candidates who were ahead in fundraising before are now lagging behind their Democratic counterparts.
But fundraising isn’t everything. And while the election seems to be right around the corner, a lot can happen in the few months we have left.

As National Republican Senatorial Committee Chairman Rick Scott of Florida says, they can focus on raising more money to promote GOP candidates over the Democratic ones. Or they can “trash-talk” those trying to give the Republican Party back the majority.

But the latter is “not what leaders do.”

If the GOP is going to make any significant gains come November, leaders are going to have to make sure to promote as many candidates as possible, regardless of “quality.” Well, that’s not entirely true. If they choose to encourage someone who could paint the Party in a bad light, things might not end up so great either.

But I have to agree with Scott about the trash-talking. That’s just not appropriate or professional.
Of course, Scott says he wasn’t referring to McConnell when he made such remarks.