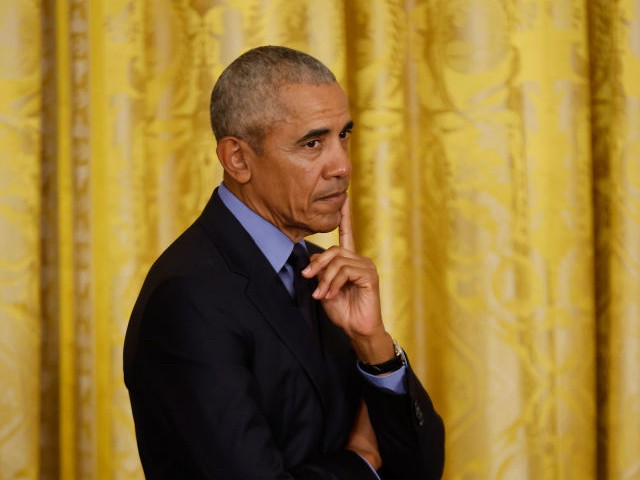 “Right now, the biggest fuel behind the Republican agenda is related to immigration and the fear that somehow America’s character is going to be changed if, people of darker shades, there are too many of them here,” Obama told a meeting of Hispanic realtors on September 25 in San Diego, California.

Obama used his divide-and-rule claims of racism to hide the public opposition to migration’s economic impact, according to his comments posted in a September 25 report by the San Diego Union-Tribune:

I wish I could be more euphemistic about it except [they’re] not that subtle about it — they’re just kind of saying it,” Obama said. “You hear it on hard-right media, you hear it from candidates and politicians, you hear things like ‘great replacement theory’ — I mean, this is not subtle. Unless we’re able to return to a more inclusive vision inside the Republican Party, it’s going to be hard to get a bill done.

Obama also argued that public opposition to mass migration is more dangerous than government support for the nation-changing migration that has killed thousands of migrants and many more Americans:

When you have that kind of rhetoric floating around out there, we’ve seen in history that is dangerous rhetoric. It’s dangerous wherever it appears and it’s dangerous here in the United States.

Since January 2021, Biden and his pro-migration border chief have extracted roughly 3 million migrants from poor countries into the U.S. economy via the southern border, likely in violation of federal law.

They have also pulled more than 2 million legal immigrants, visa workers, and white-collar illegals via airports. That massive government-engineered migration has delivered at least one migrant for every two births since January 2021.

In 2013 and 2014, Obama and Biden used claims of racism to stigmatize Americans’ popular opposition to mass migration as they were trying to push the doomed “Gang of Eight” cheap-labor bill through Congress.

But that incendiary smear is contradicted by numerous polls which show the public wants to welcome some immigration — but also declares deep and broad public opposition to labor migration and the inflow of temporary contract workers into the good jobs U.S. graduates need to raise families.

The public’s opposition to mass migration is rational because migration imposes vast economic and civic burdens on ordinary Americans while it boosts wealthy and powerful Americans.

For example, migration spikes the cost of housing. That is great for realtors but is a huge burden for young couples seeking to buy a house for their families.

Immigration has increased California’s population by at least 33 percent, sharply increasing competition for good and poor housing amid fast-growing wealth inequality, drug addiction, and homelessness. In California, the median price of a house is $725,000, according to NeighborhoodScout.com. That price is three-and-a-half times as much as in 2020, the site says.

This impact of migration on housing prices is rarely mentioned in the corporate media. But pro-migration groups tout migration as a boon for real estate investors. For example, a 2017 report by the CATO Institute says the cost of illegal immigration could be reduced by cutting spending on border enforcement: “If the typical illegal immigrant increases the value of all housing unit prices by 11.5 cents, then illegal immigrants increase nationwide housing values by about $1 trillion.”

Federal immigration policy also pulls wealth from heartland states toward coastal states. This happens because the coastal investors in New York and California who might be tempted to hire employees in distant and inconvenient heartland states know that the federal government’s Extraction Migration strategy delivers a preferable supply of grateful, reliable, and cheap workers to downtown bus stations each day.

The mass migration has also given employers an easy excuse to not hire marginalized Americans, including those who are on drugs.

The mass inflow has also given wealthy progressives a dependent population to display their charity toward — while they carefully sideline many millions of poor Americans who might vote against progressive power. This elite’s growing disregard for ordinary Americans comes amid the rising “Deaths of Despair” and the death of more than 100,000 Americans in 2021 from drug overdoses.

This dismissal of Americans is often framed as the claim that the American economy is dependent on immigrants, despite the many millions of Americans who have been sidelined by government policy. But many progressives also praise immigration because it helps to replace Americans and their society.

“The phenomenon of [population] replacement, writ large, is America, and has been from the beginning, sometimes by force, mostly by choice,” according to Bret Stephens, a New York Times columnist. “What the far right calls ‘replacement’ is better described as renewal,” he wrote in May.

Democrats and their progressive supporters are also trying to shift the blame away from Biden’s government toward the businesses that manage the economic side of the strategy.

Donor-backed Republican leaders try to hide the pocketbook pain of migration by redirecting public opposition toward the crime caused by illegal migration.

But that blame-shifting is difficult because of the public’s natural solidarity with their fellow Americans: