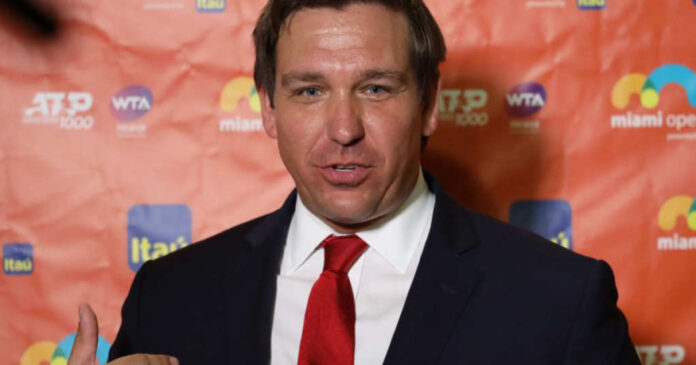 Florida Governor Ron DeSantis is a national name known in every household. For Democratic homes, the mere mention of his name causes people to groan. But for those that have experienced his leadership ability and service to the people, his name causes a lot of excitement. And that happened when the governor spoke at a rally in Kansas over the weekend.

The Floridian governor once again stole the media stage after busing dozens of illegals to Martha’s Vineyard. He wanted the migrants to have only the best that liberal-run regions offer. And he wanted the liberals to know what it’s like to care for Biden’s errors.

The liberal media purposely neglects to report on the struggles that states are under because they are forced to care for the illegals taking up residence in the shelters. DeSantis’ idea has forced the media to reveal what is happening around the country because a Republican decided to bus illegals around.

KCTC reported that DeSantis stated, “This is a crisis. It’s now getting a little bit more attention. This border is now an issue in these elections. And I think it’s something that our candidates need to take.”

The Democrats claim that they are pro-immigrant, but their actions tell a different story. The 50 people that DeSantis sent to Martha’s Vineyard were met with hostility and abandonment.

KCTV reported that the liberals, upon arrival, were rounded up by the National Guard and shipped off the island. The liberals did not want the illegals intruding on their sacred ground and destroying their piece of paradise.

DeSantis stated that “You’re talking about 50 people. Did they get them employed? Did they get them set up? No. They called out the National Guard and they deported those people off the island the very next day.”

The Republican-run states have graciously opened shelters and cared for all the people Biden smuggled into the country. Those transported to liberal states were done so to help all Americans share in a load of caring for the illegals smothering the country.

The crowd DeSantis spoke to knows the pain of caring for a bunch of people that show up out of nowhere. The president has never worked with state leaders in a coordinated effort to care for the illegals. He tells the bus driver where to go, and the people are dropped off in the middle of the night to care for themselves.

Derek Schmidt is the Republican Attorney General running for the governor’s office. His goal is to win the office and oust Laura Kelly, the Democrat trying to act like she knows what she is doing. The Republican presence in Kansas is strong and is causing issues for Kelly as she tries to hold onto her office.

Schmidt alluded to the truth that he supports DeSantis and his decision to bus migrants to liberal-run regions. It is only fair that the Democrats share in the pain of caring for people who have no business in the country.

DeSantis’s purpose in traveling around the country is to help raise the next generation of influential Republicans. He wants to see them win elections and take their place in Washington.

The standing ovation given to DeSantis is a reminder that the red wave is alive and well. The Democrats are concerned that they will lose their seats in Congress because of how they have treated people during the past two years. And they have every reason to worry because people are tired of being lied to and told that they must give up their freedoms.