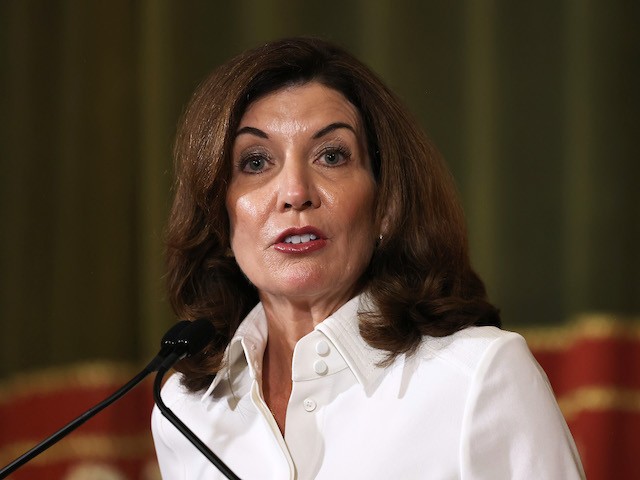 During a portion of an interview aired on Tuesday’s edition of Bloomberg’s “Balance of Power,” New York Gov. Kathy Hochul (D) stated that while “the horrific crimes that we’re seeing” keep her up at night and are “frightening” people, “New York City is still the safest big city in America. Look at Chicago, look at San Francisco, look at Los Angeles, Atlanta, and Washington. People leaving New York, I’m not sure where they’re going to go because we are the safest big city in America.”

Hochul said, “First of all, public safety is my number one priority. This is what keeps me up at night, the horrific crimes that we’re seeing. It’s frightening for people. But I also have to step back and talk about some of the targeted changes we’ve already made to the bail changes. Obviously, this was signed into law by my predecessor. The legislature went forth with the changes that they thought were important to make sure that there was public safety and justice in our court system, but we had to bring it back to make sure that judges consider other factors in deciding whether or not someone should be held on bail. They need to know whether or not there’s an order of protection, any commission of a gun violence crime. So, we gave the judges more than they had before. We also said that repeat offenders, people that are stealing off the shelves every day and selling the materials on eBay, they can’t keep getting away with that, the property crimes, in addition to the violent crimes. So, we did make changes to the bail laws.”

She continued, “But you have to look at the fact that this has been a nationwide phenomenon. Since the pandemic, crime has gone up everywhere, not just one state that happened to have some changes in their bail laws. So, we have to look at this in an honest way and say, well, New York City is still the safest big city in America. Look at Chicago, look at San Francisco, look at Los Angeles, Atlanta, and Washington. People leaving New York, I’m not sure where they’re going to go because we are the safest big city in America. We have reduced our shooting rate down 10% statewide, 13% in the city, and it’s only gone down 2% across the nation. But I only say those statistics in terms of context. That doesn’t mean that I’m not laser-focused on continuing to work in partnership with local law enforcement, not just in the city of New York, but also in Syracuse and in Rochester and Albany, where I’ve convened people to talk about how the state can, number one, fund law enforcement more aggressively, make sure they have all of the resources they need, fund other programs, make changes to the laws we talk about, make sure that we look at issues like Kendra’s Law and others where people may be falling through the cracks. We have a responsibility to protect our citizens. Between getting crime under control, working with the local law enforcement, and then building the affordable housing, there will be no stopping the explosive potential for the state of New York in this post-pandemic era.”