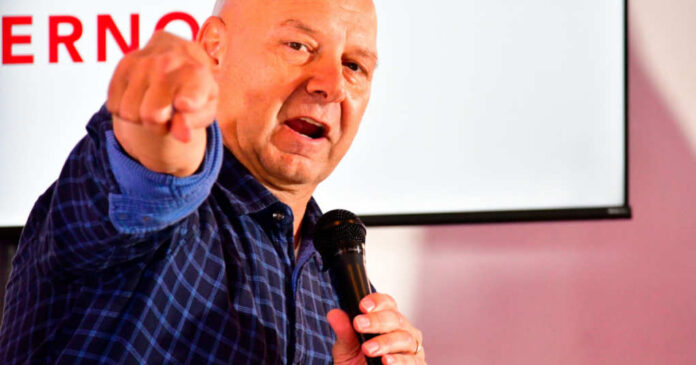 As the November midterms approach, senatorial, congressional, and gubernatorial candidates are pretty much all down to the wire, trying their darnedest to get the vote out and attain as much support as possible. Last-minute fundraisers and speaking events are being planned, and the polls are looked at daily, if not hourly. Basically, if there’s an avenue to success that hasn’t been taken as of yet, it is now being explored at great length.

And for those like Pennsylvania Republican and gubernatorial candidate Doug Mastriano, his very future and career hang in the balance.

But Mastriano is taking a different approach than many in the remaining days before the election. Sure, he’s still doing speaking events, still fundraising as much as possible, and still trying to put his best foot forward. However, he’s also committed to 40 days of fasting and prayer.

Beginning on Thursday, Mastriano started his plan and will continue it until Election Day

The announcement came on Wednesday when his campaign posted the following:

“We have a natural aversion to the idea of fasting since it involves saying ‘no’ to something fleshly we enjoy, such as food. However, we hope you consider something in this plan that will focus you more on praying for Mastrianos, our state, and the nation.”

The post invites anyone and everyone to join him in fasting and prayer to “restore true liberty” and, of course, as a part of a winning strategy for the election.

It is at this point that I should probably do a little explaining.

If you were not raised in a Christian church, whether non-denominational, Catholic, Baptist, Lutheran, etc., you probably have not heard of fasting much. And even then, it’s not something either talked about or participated in much.

Beyond Lent, the Catholic tradition of fasting for 40 days in preparation for Easter, the rising of Jesus Christ from death on the cross, most of us may have never even heard of it.

But fasting is not just merely abstaining from certain, as Mastriano put it, “fleshly” items, such as food, chocolate, alcohol, etc.

Instead, it is a time when you are supposed to let those moments when you would usually be partaking in those things, or eating, be a time of prayer, of seeking out the God Most High. Instead of filling your body with the things of this world, you are to be asking God to fill you for his will to be done.

It’s a time when you give up something you may want or even think you need to get more in tune with your Creator and Lord. And in many cases, it is done before a particularly trying task or during a tough period in life to give you more clarity, more focus, and more peace.

Perhaps that is why Mastriano has chosen to participate in the act at this point in time, mere weeks away from his biggest election yet.

As it stands at the moment, both fundraising and polls show the Republican candidate to be trailing his Democratic counterpart. In fact, according to the latest campaign finance filings, contender Josh Shapiro has out-fundraised Mastriano eight to one. And we all know just how important fundraising is to elections.

In recent weeks, his name has taken a rather big hit, as photos of him some time ago have resurfaced of him wearing the uniform of a Confederate soldier. Additionally, his strong and controversial opinions on the 2020 election and abortion have also caused some lack of support.

Then again, there is time left for things to change. Forty days is a long time when it comes to campaigning, and, as such, a lot can happen.

Despite the fact that the Cook Political Report has recently labeled Pennsylvania’s gubernatorial race as being “lean Democrat,” things could turn around rather quickly for Mastriano in the coming days, especially if God decides to step in.

In any case, a period of fasting and prayer probably isn’t a bad idea for any of us.