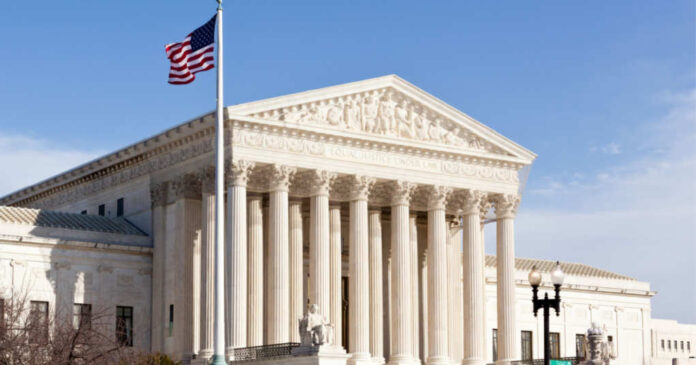 The Democrats are coming to grips with a new reality that scares them. They are seeing their majority slip away as voters indicate that they will vote for Republican candidates. And they are worried that a conservative Supreme Court will keep them from overrunning the country with unconstitutional liberal ideas.

The Supreme Court Justices will start a new term when the nine judges take a seat and formulate a new plan for the new year. The conservative makeup of the court has many liberals worried that many of their beloved anti-constitutional laws will be struck down as the court puts the country back on a constitutional path.

The Democrats want people to think that the Supreme Court is unfair and is set to lead the country into oblivion. But the thought that they will free up the First and Second Amendments and limit the ultimatums coming from the White House is exactly what the country needs to stay great and free from liberal rule.

The liberal justices want people to think that the conservatives on the bench will oppose Republican ideology. But that count not be further from the truth. The Democrats are the ones that have their hands all over the liberal justices and demand that they rule along party lines.

Liberals see attacks on their agenda as an all-out attack on freedom. They think a person should be able to engage in any behavior absent from moral obligation. The Guardian reported, “From fundamental aspects of American democracy to LGBTQ+ equality, and the electoral power of racial minorities to protecting the environment, the conservative justices have selected a whole new slew of targets that fall squarely within Republican priorities. The schedule for the first two days of oral arguments this week tells the story.”

The mass media makes it sound like the conservatives are out to moralize the country. But the facts show that the Democrats have demoralized the country to the point that evil is beginning to reign in all aspects of life. Criminals think they have a right to take whatever they want, and they are even willing to extinguish the life of any person who gets in their way.

The Supreme Court is moving into territory that needs judicial intervention. It is an area thick with morality and cultural expectations. The court will have to look at the original intent of the Founding Fathers and decide what the right course for the country to take.

The Guardian reported that the case of “Merrill v Milligan concerns Alabama, where Republican lawmakers want to draw up congressional district maps that would give Black voters the power to send just one African American member to Congress out of a total of seven representatives, even though Black Alabamans make up a quarter of the state’s population. The map was blocked by three federal judges who ruled that it was racially discriminatory and that the state had engaged in racial gerrymandering.”

The media would love people to think that it is about racial issues. But the truth is that any person can run for any position regardless of the color of their skin. The liberals want people to think that the new maps keep people of color from being equal. But that is just another weapon they use to control the country’s course.

The Supreme Court will take its seats and begin to fix the business that President Joe Biden and his liberal administration have imposed on the country. They will be the start of a march back to greatness as they force the country back onto a path that allows all people to live equally free.

The Democrats will cry and make a fuss about each ruling passed down. But at the end of the day, the decisions made by a conservative court will undoubtedly be the way the country is supposed to go.