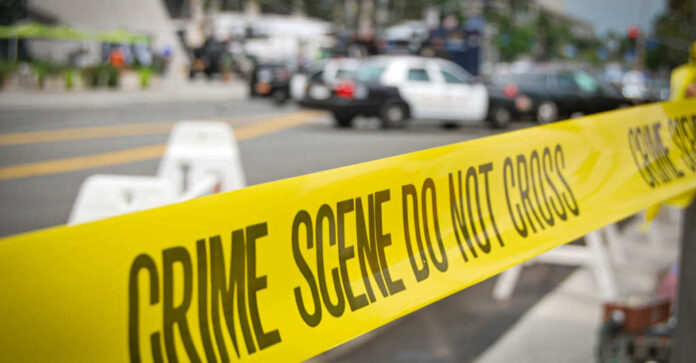 According to Zeldin, his two daughters, 16-year-olds Mikayla and Arianna, were on inside doing their homework when the shots broke out in front of their home. He and his wife, Diana, were in the car returning from the Bronx Columbus Day parade in Morris Park.

“After my daughters heard the gunshots and the screaming, they ran upstairs, locked themselves in the bathroom, and immediately called 911,” Zeldin said in a statement. “They acted very swiftly and smartly every step of the way and Diana and I are extremely proud of them.”

“The two individuals who were shot were laying down under my front porch and the bushes in front of our porch. My understanding is that they have been transported to area hospitals. I do not know their identities,” he added.

Congressman Lee Zeldin leaves the Mastic Beach, New York, firehouse with his wife Diana and his daughters after casting his vote in the primary election for New York State governor on June. 28, 2022. (James Carbone/Newsday RM via Getty Images)

Zeldin said that his family will be working with investigators by providing security footage and lamented the New York City crime wave.

“My daughters are shaken, but OK. Like so many New Yorkers, crime has literally made its way to our front door,” he concluded.

Zeldin also told the New York Post that his daughters are “freaked out” and that a bullet was “found 30 feet from where my daughters were doing their homework.”

“Crime is out of control,” he told the Post.

A law enforcement official told the Post that the shooting had nothing do with the congressman seeking to unseat Democrat New York Gov. Kathy Hochul. The shooting in front of Zeldin’s home comes after the NYPD Sergeants Benevolent Association endorsed him for governor.