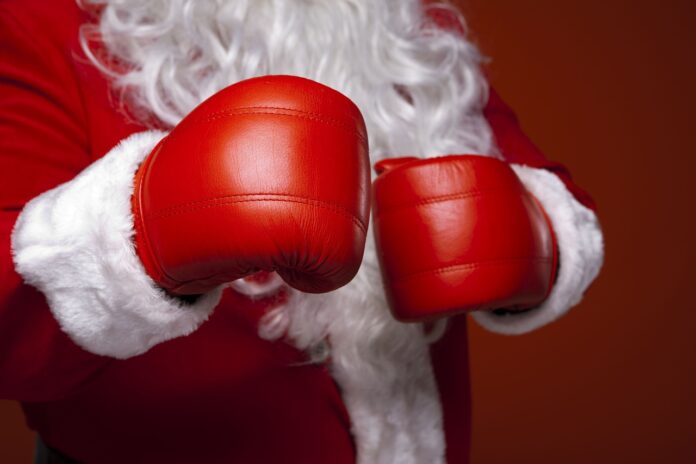 For most of us, the recent holidays are a time to spend with family, remember what really matters in life, and not take for granted the blessings we have been given. Unfortunately, this time of year does not have that effect on everyone.

Instead of giving, far too many see the experience of the holidays, with their crowded retail stores, the abundance of gift ideas everywhere, and homes left empty while families travel, as an opportunity to make some of their most significant scores of the year.

Such was the case for quite a few entering the Canyon Springs Shopping Center in Riverside, California, recently.

However, what they failed to realize was that Santa and his helpers are always watching.

Enter a Santa and elf duo of undercover cops. The pair was posted at the shopping center to catch the more usual types of thefts, you know, like that of a woman who tried to walk out of a store with a shopping cart heaping with unpaid-for items. Or like another person who had entered a store, they were banned from due to past thefts.

Both were also found with illegal drugs in their possession.

One man – a 55-year-old from Murrieta named Patrick Seilsopour – was arrested outside the shopping center by the in-costume police officers after trying to smuggle out over $1000 of Lego toy sets, according to Riverside Police.

“He was later booked into jail, but unfortunately due to the current bail schedules for ‘non-violent’ offenses, he was quickly released with a Notice to Appear citation. Mr. Seilsopour is believed to have committed similar retain thefts at several Target stores in the region.”

Most other arrests of the day ended in like circumstances, with the perpetrators getting off with little to no consequences for their unlawful actions – save being arrested by Santa.

You see, in California, petty theft or “theft of merchandise totaling less than $950 is only a misdemeanor.” As such, “any arrest made whether it’s a felony or misdemeanor, results in little to no consequences for these crimes,” according to a Facebook statement made by the Riverside Police Department.

This is due to the passing of Proposition 47, also known as the “Safe Neighborhoods and Schools Act” in 2014. Under the law, only crimes that are found to include violent acts such as rape or murder get any serious attention from the California court system and actually result in convictions.

And criminals know this all too well – hence the increase in thefts and like crimes in recent years in the state.

In fact, according to Lt. Mark Donaldson of the Vacaville Police “(Criminals) know the law. One of the first things they ask us (is), ‘Can’t I just get a ticket so I can be on my way?’”

However, there are a few crimes that don’t fall into this ignored category.

Car theft is one of those.

And Santa and his helper, along with the petty theft crimes, also caught a few of these on their day in disguise.

According to a Facebook post made about the event, “Toward the conclusion of the operation, detectives received information about three suspicious men casing vehicles in the shopping center parking lots. One of the undercover detectives spotted these three men as they were in the act of stealing an older white Honda CR-V.”

The report says that the three men headed for the hills, so to speak, upon seeing the undercover officer. But two of them didn’t get far.

“One suspect resisted arrest but was taken into custody with the help of our undercover Santa, and the second was detained by the undercover elf.”

Check out this video of Santa and his heat-packing helper putting the hurt on these criminals.

The third man managed to get away with the vehicle. But as the detectives had identified both him and the car, it won’t be long before both are in police possession. In fact, the Honda was found abandoned nearby that same day.

As for the man, police “will be making an arrest for car theft in the future.”

So much for jolly Christmas for this gang of thieves…