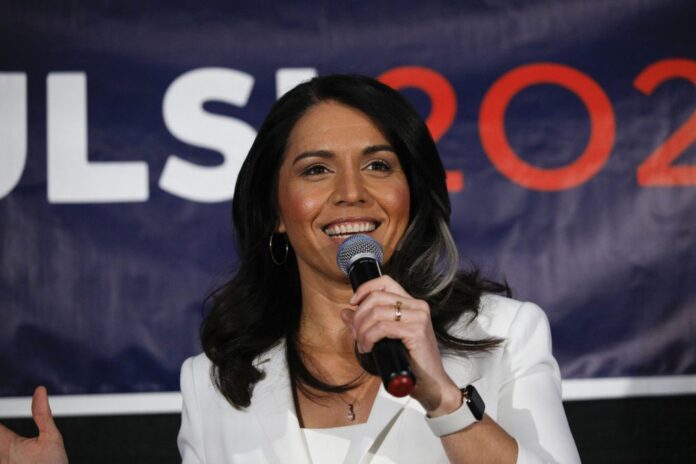 In a statement on Wednesday, Bolduc said that while he and Gabbard disagree on various issues, they at least agree that the “status quo is broken.”

“We don’t agree on every issue, but I am honored to have the support of Tulsi Gabbard who shares my view that the status quo is broken, and we need a change of direction,” Bolduc said, adding:

Tulsi is a fellow change agent and independent-minded outsider willing to speak truth to power. I am going to spend every day between now and election day building a wide coalition of supporters that includes Republicans, independents and even disaffected Democrats who know that Senator Hassan is a career politician and must be retired.

Bolduc will be running to unseat Sen. Maggie Hassan in New Hampshire, whom he currently trails by seven points, according to a recent poll. Whether or not Tulsi’s support will aid in Bolduc’s effort remains to be seen, but the New Hampshire Democrat Party had some choice words for her jumping into the race. The NHDP said:

Tulsi Gabbard is a Vladimir Putin apologist who has pushed conspiracy theories and stood with dangerous tyrants over the United States. By campaigning with a pro-Putin, extreme conspiracy theorist like Gabbard, Don Bolduc is making only more clear how out of step he is with NH.

Though Tulsi Gabbard has long been a favorite among Trump supporters for her unwillingness to toe the Democrat Party line, she upgraded her status to legendary this week when she formally defected from the party she previously called home.

“I can no longer remain in today’s Democratic Party that is now under the complete control of an elitist cabal of warmongers driven by cowardly wokeness, who divide us by racializing every issue & stoke anti-white racism,” Gabbard said on an episode of The Tulsi Gabbard Show.

“Who actively work to undermine our god given freedoms that are enshrined in our constitution. Who are hostile to people of faith and spirituality. Who demonize the police, but protect criminals at the expense of law-abiding Americans. Who believes in open borders,” she added.