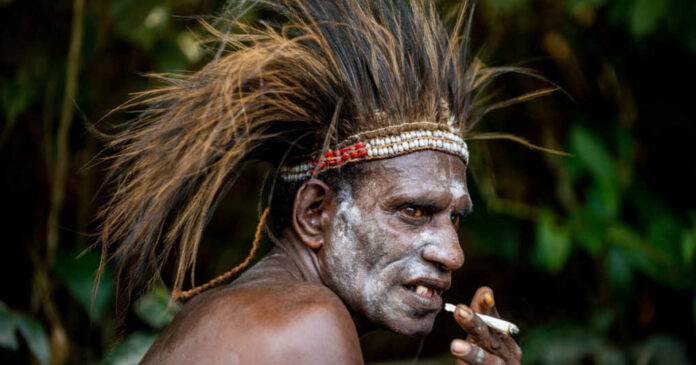 Who couldn’t sink their teeth into a nice juicy slab of human thigh meat right about now? Sound repulsive? Outside of the likes of Jeffrey Dahmer, we hope so. But cannibalism is not as uncommon as one might think. You might wanna swig some Pepto before reading what you’re about to find out.

In 1933, Ukraine was suffering the worst famine in the history of the country. Bodies were literally lying in the streets, dead from starvation. With no option, people began eating their neighbors and hundreds were even accused of chowing down on their weakest family members.

It was Joseph Stalin who had forced the famine in Ukraine, but when barbequing Uncle Vlad became a common and widespread practice he had to form an anticannibalism squad to put a stop to it.

Up until the 1950s, the Fore tribe in New Guinea, rather than bury their dead, would eat them in the belief that doing so would cleanse their soul. Because eating human meat, and especially brains, can cause a disease called Kuru (similar to mad cow disease), many of them died as a result, providing an endless food source.

Let’s jump forward to 2017 when CNN recklessly sent reporter Reza Aslan to India to explore the Aghori nomads, a Hindu sect with human blood-stained teeth. A pasty-skinned man with a big brown beard had their collective mouths watering.

But neither Asian nor his crew got gobbled up. Instead, Asian was forced to taste what all the rage was about. He was made to eat human meat with a side of brains.

One tribe member who was clearly objectionable to breaking brains with a strange white man vowed to ‘cut off his head if he keeps talking so much.’ When Asian wouldn’t take the hint, the man took a dump and started hurling his excrement at him and his crew. This prompted them to quickly exit the scene as they fled to their vehicle.

By the time they fled, Asian had already had his face smeared with the ashes of the guy they were eating, and was wearing a neckless made of human body parts to go with his crown made of bloody human teeth and gums.

Sharing his experience on Facebook, Asian wrote, “Want to know what a dead guy’s brain tastes like? Charcoal. It was burnt to a crisp!” CNN caught static sensationalizing cannibalism and in particular Hinduism which is surprisingly the third largest religion on the planet.

A journalist for the Huffington Post, Vamsee Juluri, slammed CNN for putting the men in such danger. “It is unbelievably callous and reckless of CNN to be pushing sensational and grotesque images of bearded brown men and their morbid and deathly religion at a time when the United States is living through a period of unprecedented concern and fear.”

When CNN released Asian’s documentary, the US-India Political Action Committee went into a frenzied tizzy. “With multiple reports of hate-fuelled attacks against people of Indian origin from across the US, the show characterizes Hinduism as cannibalistic, which is a bizarre way of looking at the third largest religion in the world.”

Regardless, there’s a tribe in India that still enjoys a good rump roast, and there are others out there that share their same taste in cuisine. As a suggestion, make sure your travel agent knows their stuff…