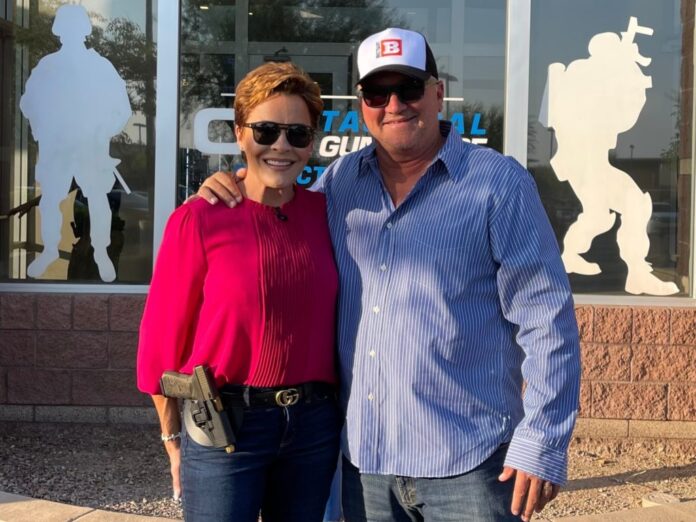 Lake sat down with Breitbart News on Wednesday at the Arizona Biltmore Resort shortly after holding a press conference outside Arizona PBS at the Arizona State University’s Walter Cronkite School of Journalism and Mass Communication. Breitbart News asked Lake what she plans to do to combat the radical CRT and gender curriculums that are being pushed on children.

“It’s really sad that we would have to write legislation to make sure our schools don’t teach our kids to be racist and don’t try to turn our boys into girls and our girls into boys… but we will if we have to,” said Lake. “I want to make sure that our children, we’re sending them off to school, and they’re not having their brains filled with psychological abuse, and that’s what it is, to be honest.”

“Our kids are colorblind. I raised my children; they didn’t see skin color. My little boy knew he was a boy, and my little girl knew she was a girl. Our school never went and tried to confuse them on that,” Lake continued before pointing to just how innocent, impressionable, and vulnerable children are to such ideologies.

“Our kids’ brains are so malleable that you can convince them that Santa Claus flies around the globe, and you know, and that’s a beautiful thing, but it shows what our kids — they’ll believe anything,” she continued. “And our schools are using that innocence of our children to twist their minds into this disturbing thought process, to where they actually want to have surgeries to change who they are is sick. It should be criminal.”

“And I will work tirelessly with the legislature to protect our children on all of that stuff. We want our kids to go to school; we want them to get smarter, not dumber,” said Lake. “We don’t want them to go in with common sense and leave confused. And we demand that our schools educate our kids.”

One tool to protect children is school choice and Empowerment Scholarship Accounts (ESA), which came to fruition through legislation that outgoing Gov. Doug Ducey (R-AZ) signed in July.

“We already have a really great policy with ESA for all,” Lake said. “So if you find out the school is doing that, you can just say, ‘We’re not sending our kids to the school; we’re going to go over here.’ And that school is going to either go under, or they’re going to change course.”

“I think ESA for all, which, people call them vouchers, but it’s ESA for all, is the way to get our schools, our public schools to change course and improve the curriculum, or they won’t survive,” she continued. “It’s the fastest way to get them to improve the curriculum. Moms and dads are not going to put up with this garbage anymore. This woke curriculum has got to go; it’s dangerous. And I’ll do whatever I can to stop in our universities as well.”