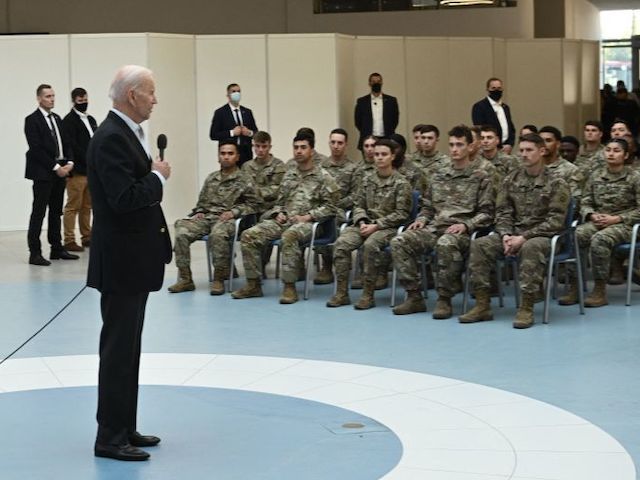 Former Marine Capt. Dale Saran is now representing more than a thousand service members in two separate cases that he hopes will end the current mandate, if he is once again successful.

During a press conference Tuesday, Saran said the Pentagon’s mandate is illegal, since it entails ordering service members to take a vaccine approved for Emergency Use Authorization (EUA) and not the vaccine licensed by the FDA, known as Comirnaty.

There is no licensed vaccine. The day that the FDA licensed Comirnaty on August 23 of 2021, the same day, it removed it from the market. So if you look at the marketing begin and end date of Comirnaty, you’ll find that it cannot be sold in the United States because it was removed from the U.S. market the same day that it was actually licensed.

He said despite the unavailability of the FDA-licensed vaccine Comirnaty, Defense Secretary Lloyd Austin the very next day, on August 24, 2021, mandated all troops be fully-vaccinated.

Although at the time Austin claimed he would only mandate an FDA-licensed vaccine, the Pentagon simply stated the two vaccines would be considered “interchangeable.” Saran called that “fraud.” He said:

The Undersecretary of Defense for Health Affairs, a woman named Terry Adirim, published a memo claiming that the unlicensed product, BNT162b2 — Pfizer’s unlicensed EUA product — could be substituted in that it was interchangeable with the licensed product. And that’s been … that’s the fraud that’s at the heart of our case.

Saran is leading two different cases, one against the Pentagon on behalf service members and another against the Department of Homeland Security on behalf of Coast Guard members, who technically belong to DHS but are also subject to the mandate.

“I had committed to to not leaving anyone behind. I have been down this road before and my clients the first time got court-martialed and sent to jail, some of them got kicked out and that left a little bit of a bad taste in my mouth,” Saran said, adding:

And so when this came up, I kind of meditated on it, prayed on it, and it was clear that we had to get involved again, to protect my people, who I can serve [as] a veteran myself,” he said. “We’re not going to stop until we get the right result, which is this has to end because it’s illegal.

This is fundamentally what we stretched people’s necks for at the Nuremberg war crimes trial — the same exact charges in fact. There was an experimental smallpox vaccine during the trial of Dr. Karl Brandt. And that was considered a crime punishable by death back then to force someone to take an experimental medical product or procedure. And we appear to have just abandon that notion by just slapping the label ‘vaccine’ on something.

Saran said he believes the mandate is not for military readiness or force protection.

“That’s all a cover story. It’s done just to break. And so whether it was intentional or not…it nicely cleaves the military into two groups, those who bend the knee and those who won’t, and it’s really hard to get off your knee once you’ve once you’ve taken it,” he said.

Air Force First Lieutenant John Bowes, a distinguished Air Force Academy graduate and F-16 student pilot, said he has been grounded for a year after submitting a request for religious accommodation. During that time, he has co-authored reports to Congress on how the mandate is hurting military readiness and injuring service members.

“Forcing out more than 80,000 members of the Department of Defense who are still unvaccinated over a vaccine that doesn’t work is a dangerous threat to national security, at a time when our recruiting is already the worst it’s been since the Vietnam War,” he said, speaking at the press conference, adding:

And if that’s not enough, the vaccines just simply aren’t safe. In the report that I helped generate to Congress, we’ve quantified that in terms of actual no kidding vaccine injuries that service members have encountered — pilots getting pericarditis, one service member having four strokes after getting the vaccine, heart attacks, so many things that are just absolutely tragic and horrific stories that that are heartbreaking to hear.

Navy Cmdr. Olivia Degenkolb, an active duty naval officer who has served for 20 years and was slated to serve as the Navy’s attach? in China, but after completing the training and within days of her flight, was placed on “operational hold” because she had not been vaccinated — even though at the time the vaccine was not even required.

“I personally had significant concerns about fertility carcinogenicity,” she said at the press conference. “These are valid concerns that Pfizer points out in their product information to the American people.”

“Under Title 21 and Title 10, the government can’t legally mandate you to take these products — you always have the right to accept or refuse the products,” she said, adding:

I raised these concerns to military leadership…and since then, that’s resulted in the loss of my assignment to China. The military has taken away training opportunities. They’ve denied leave. All of my belongings were kept for almost a year. My family had to live out of four bags — the four bags we planned to travel to China with for an entire year.

Army Capt. Grant Smith, a physical therapist, said he hoped his speaking out would not affect his pending promotion to major but that his concerns he has raised has “fallen on deaf ears.” He said:

My beliefs are informed by my scientific training and my conscience. I can lie about what I believe, but then what good am I to the organization especially as a holistic health and fitness officer? So my belief is that this vaccine is unsafe and effective for active duty service members, generally for the for our population that’s young and healthy. I believe that it’s been a disaster for readiness. And I’ve personally experienced, you know, just an untold difficulty trying to communicate this using scientific and moral rationale.

Degenkolb said she joined the military to support and defend the Constitution to ensure the American people remain safe.

“It’s my job as a naval officer to point out violations of law to military leadership. That’s what I’ve been doing. That’s what you know, nearly 80,000 military members like me has been doing and we just truly hope to that this will be resolved sooner than later,” she said.

“I personally am and I know thousands of others are as well, and we’re not doing this because we want to stick it to the man or because we’re a fringe group of rebels or we’re religious radicals or right wing radicals or anything like that,” he said.

“We were given and instilled in us values about supporting and defending the Constitution, values about integrity and excellence, and values about asking questions when something seems wrong and speaking up about it. … But the bottom line is the service members need top cover from the American people and from our congressional leaders, and I’m here to ask for that.”