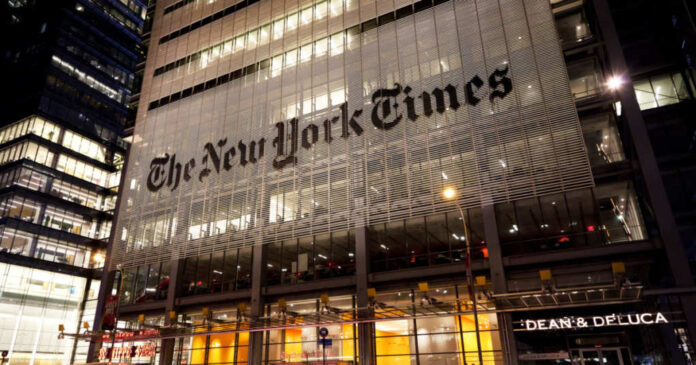 Is anybody else keeping a tally of things the mainstream media does for Democrats that they would never do for Republicans?

Here’s one to add to the list, the New York Times is once again running to President Joe Biden’s side to defend his frequent use of lies in his wildly creative narratives.

The had a recent headline that showed some promise for real news titled, “Biden, Storyteller in Chief, Spins Yarns That Often Unravel.” The article focused on the usual lies the president uses to pander to the American people, but they determined that the blatant falsehoods were just a “habit of embellishing narratives to weave a political identity.” To quote an old SNL skit with the Church Lady, “Isn’t that special.”

It must be nice to have a premiere news outlet around your feet like a wagging dog to make your lies an endearing quality.

The article actually outlines Biden’s many falsehoods, starting with a recent one delivered to the victims of Hurricane Ian in Florida.

As the president stood in front of a group of Floridians who had lost everything in the storm, Biden recalled his own house being nearly destroyed 15 years ago. “We didn’t lose our whole home, but lightning struck and we lost an awful lot of it,” he said.

Unfortunately, the Times pointed out that the president’s story was just not true. There were news reports at the time that called it just “a small fire that was contained to the kitchen.”

The local Delaware fire chief said that the fire was under control in 20 minutes.

The article in the Times didn’t stop there, it recalled several of Biden’s claims like he was “a fierce civil rights activist who was repeatedly arrested,” and he was “an award-winning student who earned three degrees,” and he was someone who was “raised in the Puerto Rican community at home, politically.”

As outlandish as all that sounds, the Times pegged it as just “Biden’s folksiness” that “can veer into folklore” with “details that are exaggerated or wrong” and “the factual edges shaved off to make them more powerful for audiences.”

The president is lying and the New York Times plays him as using it to be a powerful orator. Are they even listening to his speeches?

Instead of reporting what is real about Biden, they used his “quirkiness” as a springboard to lash out at former President Donald Trump. They said Trump was much worse and lied constantly.

After lambasting Trump, the Times went back to their lullaby of a story on Biden saying that his stories are simply “emblematic of how the president, over nearly five decades in public life, has been unable to break himself of the habit of spinning embellished narratives.”

And even though the Times couldn’t help themselves from pointing out Biden’s falsehoods, they said that anybody else that does it is trying to find “ammunition for Republicans eager to tar him as too feeble to run for reelection.”

The one surprise from this mainstream media coddler of the president was when they let this slip in the article. They revealed that Biden has been lying for decades about his own life because “as far back as his 1987 campaign for president, when his attempts to adopt someone else’s life story as his own, and his false claims about his academic record, forced him to withdraw.”

White House Spokesman Andrew Bates had this to say about Biden’s stories, “President Biden has brought honesty and integrity back to the Oval Office. Like he promised, he gives the American people the truth right from the shoulder and takes pride in being straight with the country about his agenda and his values.”