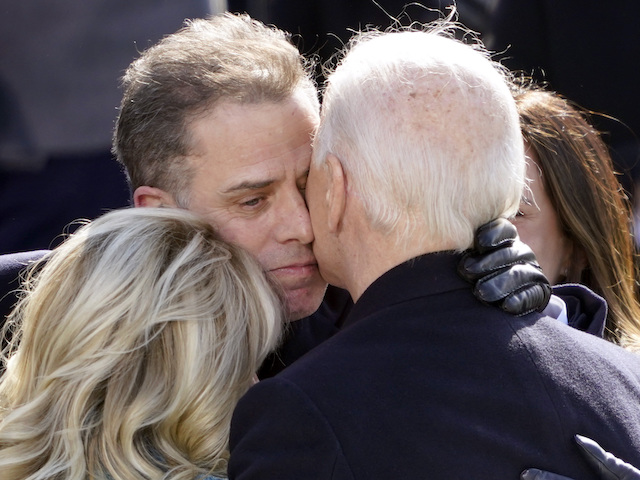 Hunter is under federal investigation for tax crimes and lying on a federal form to purchase a gun. He will also face investigations of his foreign business deals if Republicans win majorities in Congress.

But Jill Biden dismissed all of it.

“I love my son, and I will keep looking forward,” she said.

The Biden family continues to defend Hunter, insisting he did nothing wrong.

“I have great confidence in my son,” President Joe Biden said in a recent interview with CNN’s Jake Tapper. “I love him and he’s on the straight and narrow, and he has been for a couple years now. And I’m just so proud of him.”

This week, it was reported that Hunter Biden made a $40 million real estate deal in 2012 with Russian billionaire and wife of the former mayor of Moscow, Yelena Baturina, while President Joe Biden was vice president.

Hunter Biden is the subject of a brand new narrative film, My Son Hunter, marking Breitbart’s expansion into film distribution. The film was directed by Robert Davi (Goonies, License to Kill, Die Hard) and stars Laurence Fox (Victoria, Inspector Lewis, The Professor and The Madman) as Hunter Biden; Gina Carano (The Mandalorian, Deadpool, Heist) as a Secret Service agent; and John James (Dynasty) as Joe Biden. It was produced by Phelim McAleer and Ann McElhinney (Gosnell movie, FBI Lovebirds: Undercovers) from the Unreported Story Society. The film is available RIGHT NOW for Streaming and Downloading at MySonHunter.com.https://www.youtube.com/channel/UC0xmod39GwOvyyTy1M5pHLg