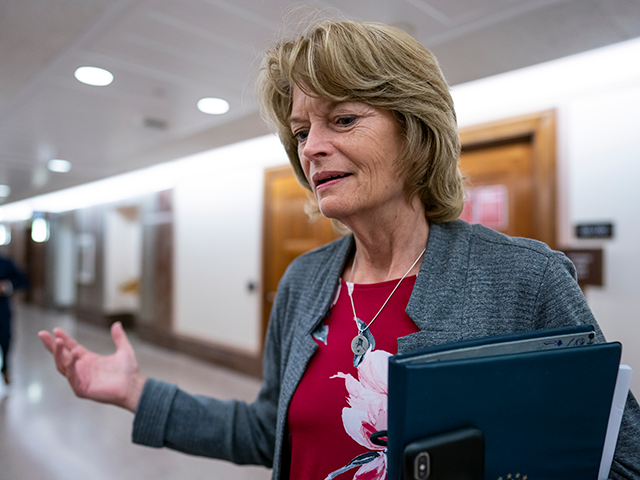 “Yeah, I am,” Murkowski responded Friday when asked by the Anchorage Daily News if she would vote for the Democrat.

Alaska uses the ranked choice voting system, which ultimately affords Democrat voters the opportunity to vote for Murkowski on the second and third ballots. Murkowski’s decision to vote for a Democrat is likely intended to attract more votes down-ballot to ultimately defeat Trump-endorsed Senate Republican candidate Kelly Tshibaka, who is leading in the polls by a slim margin.

A recent video exposed a Murkowski aide who said the 2020 ballot initiative to decide whether to institute ranked choice voting in Alaska was pushed by people who “wanted Lisa to get reelected.”

All candidates from all parties appear on the ballot together in the August primary. The top four vote-getters regardless of party then advance to the general election, and their voters are given the opportunity to pick their top choice, as well as their second and third choices. If no candidate in the first round of voters’ first choices gets 50 percent of the vote, the last place candidate’s second choices are distributed across the remaining three candidates to see if someone can get across the majority threshold. If that fails again to produce a majority vote-getter, then a third round is conducted where the third place candidate’s votes are redistributed according to second choices between the remaining two candidates.

In essence, Murkowski is willing to ally herself with Peltola, a House member since September after a special election, to receive help in her own race from Democrats.

In a recent podcast interview, Palin warned that ranked choice voting would “elect Democrats and destroy our country.”

Murkowski’s alliance with Peltola comes as the Republican Party of Alaska voted in March 2021 to censure Murkowski and asked her to leave the party after she voted to impeach former President Donald Trump. Murkowski has refused to leave the party and has, instead, doubled down by working with Democrats. In the last two years, she has voted nine times with Democrats. If reelected, she has pledged to continue to aid the Democrats’ agenda.

Murkowski also has the backing of Sen. Mitch McConnell’s Senate Leadership Fund, which has flooded the Senate race with about $9 million. Seven Alaskan Republican committees have issued a public rebuke of McConnell’s financial influence behind the 21-year incumbent Senator in opposition to Tshibaka.

In total, Murkowski has outspent Tshibaka by about $7.5 million, though polling shows Tshibaka is leading. Eighty-five percent of Murkowski’s campaign contributions have come from out-of-state donors. The large percentage of money raised by Murkowski outside the state raises questions about where her interests lie.