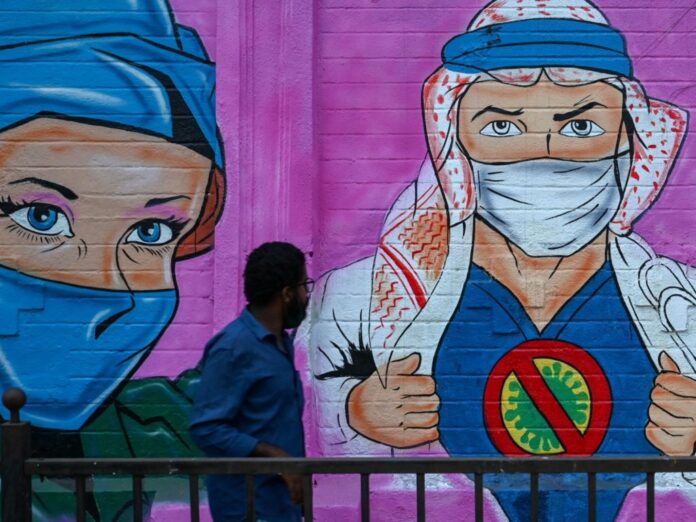 The report includes findings from 2020, a year in which most governments in the West, and a large number in the rest of the world, invested heavily in “Stay Home, Stay Safe” campaigns urging citizens not to leave their homes or engage in any outdoor activity as a means of preventing the spread of Chinese coronavirus. Governments around the world, including many local governments in America, closed down some of the most important sites of physical activity for adults and children – gyms and playgrounds – going as far as to prosecute some gym owners for defying lockdown restrictions and arresting parents for giving their children fresh air.

A signs hangs outside a closed playground in Washington, DC, on April 29, 2020. (SAUL LOEB/AFP via Getty Images)

A sign states that the beach is closed by order of California Gov. Gavin Newsom who directed Californians to stay at home during the coronavirus pandemic on March 28, 2020, in Seal Beach, California. (Bob Riha, Jr./Getty Images)

A mural of Ariana Grande is seen in Dublin, Ireland, on Nov. 16, 2020. The mural is part of a “Stay At Home” series encouraging people to socially distance during the coronavirus pandemic. (Artur Widak/ NurPhoto via Getty Images)

In contrast to the policies that many governments took in discouraging outdoor activity during the early days of the pandemic, the W.H.O. emphasized, “the [Chinese coronavirus] pandemic has shown that physical activity must be a core component of public policy, with all countries ensuring provision of equitable physical activity opportunities for all.”

“Globally, physical inactivity costs health systems US$ 27 billion a year and by 2030, US$ 300 billion,” the report found, noting that lack of exercise and movement is particularly linked to preventable non-communicable diseases (NCDs), such as depression or heart conditions.

“The economic burden of physical inactivity is large. Globally, almost 500 million (499 208 million) new cases of preventable NCDs will occur between 2020-2030,” the report found, “incurring treatment costs of just over US$ 300 billion (INT$ 524 billion) or around US$ 27 billion (INT$ 48 billion) annually if there is no change in the current prevalence of physical inactivity.”

The W.H.O. noted that its member states had identified exercise as a critical health initiative in 2018, a year before the novel Chinese coronavirus began spreading in Wuhan, China. It identified a substantial decrease national government campaigns to promote physical activity and “national mass participation events” from 2019 onward, but did not go as far as to condemn countries for lockdown initiatives throughout 2020. It did, however, condemn school closures as detrimental to children’s health.

“School closures denied many children one of the opportunities they had to be active in communities where options for physical activity, sport and recreation are absent or inaccessible,” the report detailed. “The response to the pandemic also revealed the importance of providing opportunities that enable everyone to be regularly active no matter their age, gender, income, ethnicity or physical ability. The experience of the pandemic has made it clear that physical activity can no longer be viewed as a ‘nice to have’ component of public policy.”

The W.H.O. emphasized that physical activity is especially important for children of all ages, who “Stay Home, Stay Safe” campaigns particularly targeted through the use of children’s entertainment urging them not to engage others socially or leave the house.

“The [Chinese coronavirus] pandemic revealed the vital importance of regular physical activity for both mental and physical health,” the W.H.O. emphasized elsewhere in the report. “Walking and cycling became essential forms of exercise, and transport for short trips. Access to public open spaces was essential and provided opportunities to be active outdoors when sport and exercise facilities were closed.”

“These factors were critical in helping people manage stress and maintain physical health through times of national constraints and movement restrictions in response to [Chinese coronavirus].”

W.H.O. Director-General Tedros Adhanom Ghebreyesus – who has criticized the last major country still implementing lockdowns in 2022, China – lamented in a letter introducing the report that the pandemic had “set things back even further for physical activity,” advising, “supporting people to be more active through walking, cycling, sport, and other physical activity has huge benefits not only for the physical and mental health of individuals, but also for societies, environments, and economies.”

The report is beginning the work of undoing two years of propaganda, most aggressive in the early months of 2020, encouraging people to be sedentary and not socialize with others out of fear of Chinese coronavirus. A slew of celebrities in the United States encouraged Americans, one of the world’s most obese populations, promoted sedentary lifestyles throughout March 2020.

“Stay at home as much as possible. Listen to the experts, ignore the morons (foreheads). We will get through this together,” Arnold Schwarzenegger, a fitness celebrity, advised at the time. The aforementioned Ariana Grande insulted her fans by discouraging them to attend fitness classes.

Model and host Padma Lakshmi went as far as to claim that “self-quarantining” would “prevent so many unnecessary deaths.”

Arnold Schwarzenegger at the Digital X conference in Cologne, Germany, on Sept. 7, 2021. (Roberto Pfeil/dpa via AP)

“There are few areas in public health – such as physical activity – where evidence on required action is so convincing, cost effective and practical,” the W.H.O. concluded, observing that “those who meet recommended levels of physical activity have a 20-30% reduced risk of premature death.”

“About 7-8% of all cases of cardiovascular disease, depression and dementia, and about 5% of type-2 diabetes cases, could be prevented if people were more active,” it predicted.

The United States is the largest source of funding for the W.H.O.