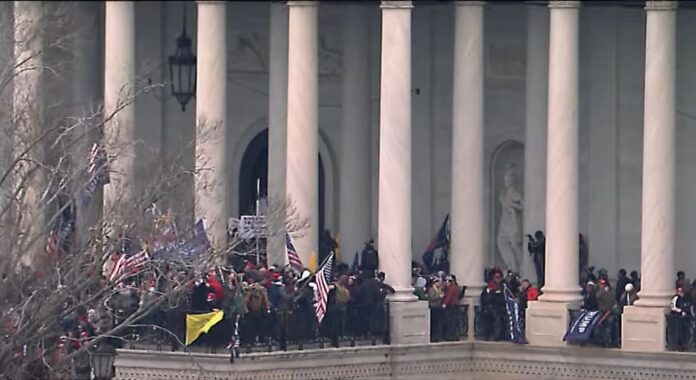 Americans were shocked to learn that an unarmed woman had been fatally shot during the Washington D.C. protest on Wednesday. The woman, who has been identified as Ashli Babbit, was an Air Force vet from California, according to The New York Post.

Babbitt, like many of the roughly two million demonstrators in Washington on Wednesday, was an avid supporter of President Donald Trump and had reportedly tweeted earlier in the day how  “nothing will stop us” and “the storm is here.”

“I’m numb. I’m devastated. Nobody from DC notified my son and we found out on TV,” the husband’s mother, Robin Babbit, told The Post, saying of her daughter-in-law, “She is a Trump supporter.”

Everything is “pretty surreal,” added Aaron’s brother, Justin. “It’s hard because we haven’t been officially notified.”

The veteran-turned activist was apparently shot in the neck by Capitol Police during the height of the unrest in Washington on Wednesday. Prior to her efforts to draw attention to the fraudulent election, Babbitt tweeted, “Nothing will stop us…. they can try and try and try but the storm is here and it is descending upon DC in less than 24 hours….dark to light.”

Babbit used the Twitter handle CommonAshSense and also retweeted Wednesday morning — a few hours before she and other Trump supporters stormed the Capitol — a “MUST BE DONE LIST before Congress meets today.”

It included, “Mike [email protected] @Mike_Pence must resign & thereafter be charged with TREASON,” and, “Chief Justice John Roberts must RESIGN.”

Babbit and many others believe that they needed to take drastic action to circumvent the fraud that is being perpetrated in the houses of Congress in recent years, culminating with a rigged presidential election.

Reports conflict as to whether Babbit was shot in the neck or the chest, but there have been no reports of her, or any other protesters, bringing weapons of any kind to the event.

“Video footage captured the sound of the gunshot, and showed the woman crumpling to the floor from multiple angles,” the Post reported. “She apparently was shot by Capitol Police, law enforcement sources told The Post.”

Babbit was active on Twitter even up to before the rally. She interacted with a tweet Monday by conservative author Melissa Tate saying, “Landing in DC. Here to do God’s work. Save the Republic,” Babbitt responded, “I will be there tomorrow! God’s speed!” She also retweeted footage of the pro-Trump crowd that was gathering in DC ahead of Wednesday’s demonstration.

Questions surrounding the event are plentiful: who really breached the capitol building? Were they actually Trump supporters? Did capitol police really fire on unarmed demonstrators the way countries like China and Russia do? Are there more victims, as citizen journalists have reported on social media? Why is the media covering these events so differently than just months ago when monumental buildings were being set on fire during the Black Lives Matter protests?

Americans are not likely to soon forget the way the will of the people was circumvented in the 2020 presidential election. They’re not going to quickly scrub the sight of cities burning to the ground at the behest of the left and bullets fired into unarmed crowds who amassed require their representatives to carry out justice.

What we might forget is what it’s like to feel proud of our country, or to have complete freedom. We might forget about the hopes and dreams that could become unattainable in the wake of growing tyranny.  Details are still forthcoming, but it appears that both Ashli Babbit and the Republic have crumpled under the crushing blow of a government that has become out of control. May the republic Babbit spent more than a decade defending fare better than she did demonstrating for it.