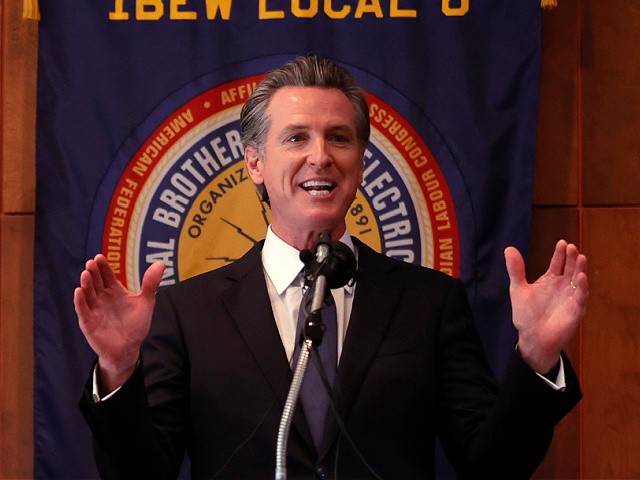 In the debate, hosted by Bay Area public radio station KQED, Newsom faced off for the only time against his Republican opponent, State Sen. Brian Dahle (R-Bieber), whom he tried to cast as a pawn of “big oil.”

Dahle irked Newsom by suggesting that the governor was already campaigning for president, and the moderators noted that Newsom was running ads for himself in Texas and Florida, where Republican governors are facing reelection.

Many have speculated that Newsom intends to run for president in the event that President Joe Biden, who is nearly 80, decides not to run again.

Asked directly whether he intended to serve all four years — i.e. through 2026, bypassing the 2024 presidential election — Newsom said: “I’ve barely been out of state. I’ve been out of state for a few hours, to take on his party — and the leader of his party, Donald Trump.”

Newsom’s claim to have been out of the state for only a “few hours” was false. Earlier this year, he traveled to Montana for a family vacation, defying California’s ban on state-funded travel to Montana and other states that have enacted laws to protect women’s sports from transgender male-to-female competitors. Newsom claimed that the trip was personal and not state-funded, but he traveled with state-funded security.

In attacking Dahle over energy policy, Newsom also falsely claimed that consumers in Texas, Florida, and Indiana pay higher electricity bills than consumers in California do.

In fact, according to saveonenergy.com, Texas and Florida consumers pay half of what California consumers do per kilowatt-hour, though the average monthly bill is four cents higher in Texas and six dollars higher in Florida due to greater usage.

In Indiana, the cost of electricity is about 12 cents cheaper per kilowatt-hour, and the average monthly bill is about $12 lower, than in California.

When Newsom accused Dahle of “doubling down on stupid” by backing fossil fuels, Dahle countered that “stupid” meant forcing consumers to buy electric vehicles, and then telling them not to charge those vehicles during electricity shortages.

Dahle also claimed that Newsom was focusing on national issues because he could not run on his record in California.

Later, Newsom struggled to explain why he sends his children to a private school, while claiming credit for improving public schools.