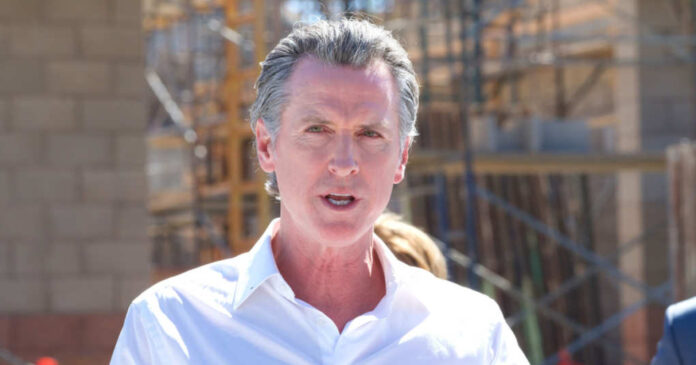 I’m going to go ahead and assume that anyone reading this tends to side with the Republican or conservative side of the political aisle. If you don’t, you probably won’t like all that much of what you read.

With that being said, I doubt any one of you wants to see someone like California Governor Gavin Newsom in the White House. It’s bad enough that Biden and California-grown Kamala Harris are there.

But now, there are rumors that Gavin might attempt a national run at the Oval Office come 2024. It’s a scary idea, I know.

Then again, as one GOP Representative says, go ahead, let him run. In fact, according to Florida’s Byron Donalds, Newsom should run for president. And he’s even excited about it.

Well, as he told “Florida’s Voice” editor-in-chief Brendon Leslie, he will lose “very badly.” Besides, it will give California a much-needed break.

Donalds looked right at the camera and said, “Gavin, hey listen man, trust me – you should run for president. You know why? ‘Cause you will lose very, very badly. And the people of California – they need a break.”

If you didn’t already know, California is struggling quite a bit. Once a state of rich history, glorious ‘golden’ cities, and a vibrant people and community, it has since been swallowed up by crime, extremely high taxes, and the cancellation of all things historical.

As a result, the state is losing no small number of its residents as citizens flee to greener pastures.

According to The Los Angeles Times, both San Francisco and LA are now ranked as the first and second in the nation that people are leaving, respectively. In 2021 alone, more than 360,000 Californians left the state, per CNBC.

If you live in either of the two states, the reason is likely pretty obvious. Hell, I don’t live in either, and even I can understand why someone would want to move from the not-so-Golden State to the Sunshine State. And no, it has nothing to do with the sun.

According to The James Madison Institute, people are arriving in Florida in droves because, unlike in California, their leadership seems actually listen to their needs and wants. For starters, taxes are low, and business is booming. Even before the pandemic hit American shores, Florida was more opportunistic than California.

Additionally, Florida had an unemployment rate of only 2.7 percent in August. Meanwhile, California’s hovers at around 4.1 percent, well above the national average. Then, there is the whole homelessness problem that seems to be overrunning the west coast state.

California has so many people in recent years, in fact, that they have officially lost representation in Washington, DC. Thanks to the 2020 US Census, California no longer needs quite as many congressional districts or representatives in Congress due to so many leaving the state.

Meanwhile, both districts and representatives have been added to GOP-run states like Florida and Texas due to the influx of new citizens.

And that lack of representation has left California even more wanting. So much so, in fact, that liberal Newsom started putting out ads in Florida encouraging residents to move to California. Of course, he spouted the state’s recently expanded abortion laws and LGBT rights as a major reason.

Little does he know that both are also major reasons why people leave his state.

While California allows abortions up to six months into a pregnancy –when most consider the unborn child to be able to live outside of the womb – Florida limits abortions to only 15 weeks, or just under four months. Exceptions exist for pregnancies in which the mother’s life is in danger or the child has a fatal abnormality.

California also embraces the teaching of sexual orientation or gender identity to school children as young as five or kindergarteners. In fact, it even requires it.

Florida’s governor, in contrast, says this is inappropriate and therefore limits that kind of instruction to children above the third grade only, according to HB 1557, coined incorrectly as the state’s “Don’t Say Gay” bill.

No wonder Americans prefer Florida to California. It’s also why Donalds is precisely right about Newsom running in 2024. It’s a good idea if only to show him how insignificant and wrong he is. And, of course, to allow someone who actually works for Californians a chance at the governor’s mansion.