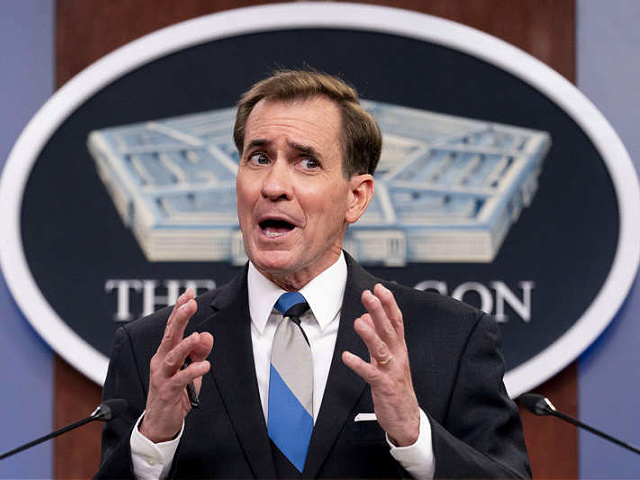 Pentagon Press Secretary John Kirby said during a press briefing Tuesday that what the department is “really focused on” is defending the nation.

“That means putting in place the right resources, the right strategies, the right operational concepts to do that around the world,” he said. “Now, in order to do that, you need good people.” He added:

“That’s the very least we can do. And there’s no apologies for that — no apologies whatsoever for wanting to create that kind of a working environment,” he said.

Kirby’s remarks were in response to a question about criticism from Republican lawmakers who argue that the Pentagon’s focus on diversity and inclusion is a distraction from defending the nation against adversaries such as China and Russia.

“The job of the military is to kill the bad guys and it is to strike fear in the enemies of America,” Sen. Ted Cruz (R-TX) said in a recent interview on Fox News’s The Faulkner Focus.

Rep. Dan Crenshaw (R-TX) has also launched a whistleblower page for members of the military to report on wokeness spreading throughout the military.

Republican senators and lawmakers have rallied behind Air Force Lt. Col. Matthew Lohmeier, who was fired from his command at Space Force after warning about Marxism and critical race theory spreading in the military.

Breitbart News recently exclusively reported that civilian and military personnel for Joint Special Operations Command, the command that oversees the most elite forces and missions, have been encouraged by Pentagon bureaucrats to attend diversity and inclusion training.

Defense Secretary Lloyd Austin also defended the Pentagon’s diversity and inclusion efforts in a recent interview against criticism they are making the military too soft.

“It is not too soft. It will never be too soft. You know, I think our adversaries would like to capitalize on talking points like that or, you know, the Chinese, the Russians. And I welcome them to do that because what this Department, what Lloyd Austin is focused on is to the defense of our nation,” he said in an interview with CNN.

“I will not lose one minute of sleep about what the Chinese leadership is saying or what Vladimir Putin is saying. What I will focus on and what I am focused on is the defense of this nation,” he said.

Kirby said the Pentagon respects Congress’s rights and responsibilities to provide oversight of the department and that he would not comment on what any member of Congress is doing but indicated such diversity and inclusion efforts would continue.

“It is a work in progress. It’s not the kind of thing that you can just say on one day and walk away. You’ve got to keep focusing on it. It’s about leadership. It’s about how you treat people and how people should be expected to be treated when they — when they wear the uniform of this country,” he said.

“So again, we’re focused on defending this nation. That means the capabilities the systems, the programs, the things you guys covered on Friday, but it also means the people — the sons and daughters that American parents all throughout this country are helping support and helping encourage to come wear the uniform.”