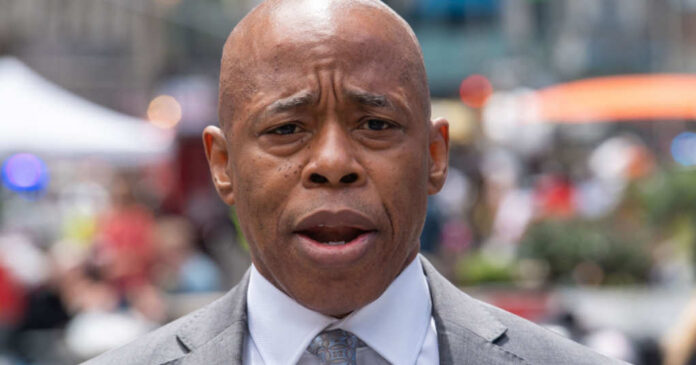 NYC Mayor Eric Adams has staffed his cabinet, teams, and even his door people with some of the most selfish, gutless, and misguided people you could ever imagine. This man is pure evil, and he wants the streets of NYC to be just as vile and screwed up as he is. So when he packs his team with officials who openly hate cops, they need to be exposed.

The project has been bringing problems of corruption and misinformation to light for 12 years now, and they don’t just focus on the problems in DC. This time they found and spent some time with Chris Baugh. Serving as an official working inside the Mayor’s office, he spoke with reporters for the project who were undercover looking for his true feelings.

When the topic of NYC’s finest, the NYPD came up, he did not hold his tongue about them or their jobs. “I have no sympathy for them. They made a choice [not to get vaccinated]. They chose not to do a very harmless thing that protects the rest of society. F**k ‘em. 1,400 people voluntarily quit their jobs rather than get vaccinated.”

Never mind the fact that even now science is proving that these vaccines are a horrible idea for everyone. People have been dropping like flies because there was ZERO long-term testing for the vaccine, and now they want to force it on kids to attend school. For Baugh, he is happy to take the jabbed and use them to fill the thousands of holes he has in NYC employment.

“I don’t give a sh*t. They are like, ‘This is unfair.’ F**king deal with it. We’re allowed to set the terms of employment. Period. I have no sympathy for those people. That was the rule…Again, no one was required to get vaccinated. You just had to get vaccinated if you had a job. So, you could have moved to Florida… Being a cop is like the cushiest gig in the city. Like, you might get shot, but otherwise, it’s very good.”

So, we have an NYC official on tape making these kinds of inflammatory comments, and then he wonders why people want him and Mayor Adams went before his term is up in 2025. The fact that people get put into these kinds of positions to make decisions about vaccines or mandates with ZERO understanding of how they work, is mind-boggling. Yet here we are with morons at the wheel of the ship driving us right towards the rocks.

The biggest problem with the elite left is the hypocrisy in their decision-making for the American people’s bodily autonomy. With COVID and the vaccine, in their eyes, you had no right or reason to question the decision of the CDC or Dr. Fauci. You just needed to shut up, roll up your sleeve, and take the jab like a good little sheep. No questioning the science, speed of the vaccine, or how effective it would be. Especially any side effects, most definitely don’t ask about that.

Meanwhile, do you want to kill your baby? Go ahead. Don’t forget to grab a card made of recycled condoms, they’ll punch it for every visit you make. Your sixth visit is on them! Never mind the fact that the baby had no autonomy in deciding its own course of life, or even if it got a chance to live.

Should the leftist baby live, they want to ensure you have the autonomy to decide that you’re not a boy, but a girl at six. Mom and dad’s consent? It’s like getting an abortion in the eyes of the left, and you don’t need their permission. You already know your body and what’s best! Idiots!