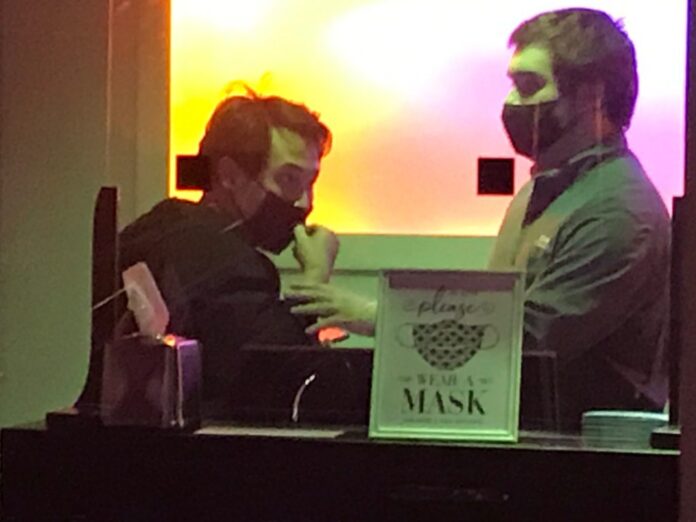 The so-called journalist behind this report, Suzette Smith, demonizes journalist Ngo while refusing to identify his (if Ngo was indeed the victim) attackers as who they are — the left-wing terrorists who call themselves Antifa:

Ngo’s willingness to post the mug shots and other personal information of arrested protesters has caused many of the people in Portland’s leftist movement to see him as something like an existential threat. In his reporting–via Twitter, the conservative news site The Post Millennial, and guest appearances on Fox News–Ngo has been regularly accused of sensationalizing the danger presented by anti-fascists and other left-wing groups.

Ngo is the nation’s most prominent media detractor of Portland’s anti-fascist movement. In January, he published a bestselling book criticizing antifa.

Here’s her obscene description of the assault…

“A group of five to 10 people in identity-obscuring clothing called ‘black bloc’ followed the person they suspected of being Ngo for blocks, inquiring who he was.”

This person denied he was Ngo, said his name was “Jake,” but after the thugs attempted to remove his mask, he “ran for blocks before someone in the pursuing group tackled him … and punched him several times after his head hit the brick sidewalk.”

A nearby man holding a skateboard admonished the group, saying that their quarry looked like he’d “had enough.” However, when someone nearby shouted that the person they were assaulting was Ngo, the skateboard-carrying man changed his attitude, swearing and joining the group.

When the fleeing man took shelter in The Nines, he appeared to be pleading with staff. “They’re going to kill me,” he said.

This so-called reporter then describes a “small crowd of leftist protesters” pulling “on the hotel’s front doors and shout[ing], ‘You wanna kill us? You wanna kill us, Andy?'” while the hotel staff “frantically tried to hold the entrance closed.”

Five paragraphs later we’re finally told this “small crowd of protesters” was in fact a mob of “approximately 75,” and under what definition does a mob filled with bloodlust fall under the definition of “protester?”

For his part, Ngo has not responded to inquiries about the incident and his invaluable Twitter account, where he posts most of his reporting, has been dark since the 28th.

In a major American city a mob of masked terrorists are openly roaming the streets targeting journalists for assaults or worse, and there’s no uproar from the very same media that have declared it dangerous and an act of violence to simply criticize them.

This just tells you how vital Antifa and Black Lives Matter are to the Democrat party and media… These terrorist groups are no different than the Nazi party’s Brownshirts, the mobs who ran around Germany beating down the political opposition. This is exactly what Antifa and Black Lives Matter do and in order to keep their modern-day Brownshirts in the streets, the Democrats and media do everything in their power to shield them.

And need I point out Ngo is Asian…?

Wasn’t it just a few weeks ago this same media were all in a tizzy over assaults on Asians-Americans? Oh, yeah, right up until it was discovered that anti-Asian hate crimes were occurring almost exclusively in Democrat-run cities and a disproportionate number of the accused did not end up being white Trump voters.

It is long past time for real Americans to accept the fact the Democrat party and the media’s war against us is no longer a cold one. Violence is now condoned, encouraged, and justified.

Andy Ngo is a hero who regularly risks his skin to tell a truth the media want buried. Since his so-called “colleagues” in journalism only want to see him harmed, let’s not forget to show our appreciation.

Whoever took that beating Friday, whether it was Ngo or someone else, try to imagine the terror of a mob of 75 howling terrorists demanding you be handed over to them, and there being no arrests afterwards… Try to imagine reading a write up that suggests you were only the victim of a “small crowd of protesters” and kind of had it becoming because you do what the media is supposed to do — release the names and mugshots of those arrested.

This is happening in America today.

We live in a very different country than we did just a few years ago, one where we should not only cherish the Second Amendment all the more, but take advantage of it.

This is not a drill.