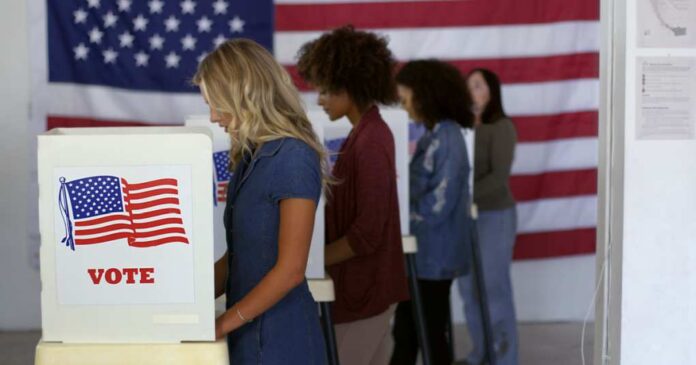 Gretchen Whitmer has plagued the state of Michigan for entirely too long. Her lockdown policies during the COVID pandemic nearly broke the economy and caused countless businesses to close their doors forever.

It has been clear from the beginning that there are a number of people who aren’t happy with the Democratic governor’s performance. At one point, there was even a kidnapping attempt.

Now, she’s up for re-election. She thought she was a shoo-in. After all, she’s a Democrat, and Michigan is a blue state.

The reality is that people are done with the brainwashed mindset of “vote blue no matter who.” Many people have seen what liberal politics look like and want to distance themselves from the chaos.

Even though Whitmer is the Democrat on the ticket, many Democrats are deciding that they might want to go a different way. While it’s still way too early to call the election, early polls show that the Republican candidate may be in the lead.

It’s amazing to see just how far Whitmer has fallen in the past two years. At one point, she was even considered a potential VP to pair with Joe Biden. Only, she didn’t fit his desired checklist. She might have been female, but she was white – and he wanted a minority. As such, she was quickly kicked to the curb so that he could move on to someone with a darker complexion.

Tudor Dixon is the Republican running against Whitmer in the gubernatorial race. Dixon is a breast cancer survivor, a businesswoman, and a conservative political commentator. She’s also a few years younger than Whitmer and has a lot to offer the people of Michigan.

Polling data from RealClearPolitics shows that Whitmer and Dixon are nearly tied at 48 percent apiece. However, if you look at the trend of how Democrats are being edged out, it’s very possible that Dixon will take the lead in the next few days.

The GOP has been warning about the red wave – and Democrats have been showing their fear constantly. Of course, we’ve all heard the excuses. Biden isn’t doing enough, we’re in the middle of a recession, the pandemic is just coming to a close, and the Republicans are making it hard for us to do anything in Congress, yada…yada…yada.

Michigan may quickly turn red – and there are a few other states that could experience a color change, too. That would include Nevada and Oregon.

Another poll from Michigan News Source and Trafalgar looks at responses from over 1,000 voters. Whitmer has 48.4 percent of the votes while Dixon has 47.9. That sounds great for Whitmer, but when you dig in, you see that 55 percent of the respondents are registered as Democrat. That means that more Democrats are actually choosing to cross the line and vote for Dixon. And if that trend continues all the way through election day, Ms. Whitmer will be out of a job very soon.

It’s hard for Whitmer to get a win. What has she done recently? Well, she’s caused many small businesses to close. She’s allowed various cities to continue to experience undrinkable, lead-based water, and she’s watched as crime continues to skyrocket.

Why would anyone vote to keep her in office unless they are still reciting the chant from the presidential election?

The reality is that people don’t want to vote blue no matter who, especially if it means keeping Whitmer in office. Stay tuned. It might be time to welcome in a new governor to Michigan very soon.