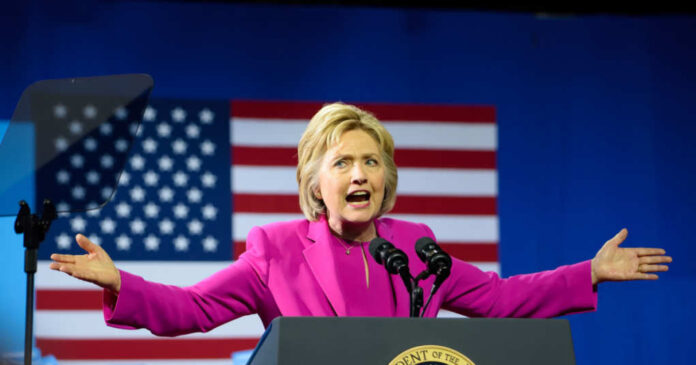 Hillary Clinton is no longer talking about how the 2016 election was stolen from her because of Republicans and Russian collusion. That’s the good news.

But get ready for the bad news, the failed presidential candidate is now talking about how the Republicans are going to steal the 2024 presidential elections. She is preemptively beginning to sow the seeds of doubt into the legitimacy of our country’s Democracy. And she’s doing it because it seems like an effective way to raise money for her Democratic Party.

The irony is that Democrats have been the ones whining about how “planting seeds of doubt” undermines democracy. The party continues to lash out at some Republicans, calling them “election deniers” for even questioning the legitimacy of the 2020 election. Anyone who even raises a question is considered to be a traitor to their country.

Clinton told Joe Biden not to concede “under any circumstances” when he was just a candidate.

Now after so much whining about election denial from the GOP, even after her repeated suggestions that the 2016 election was “stolen” from her, Clinton is beginning to already talk about a “coup” that is already forming to steal the 2024 election.

In a video posted on Twitter through the leftist organization

“Indivisible,” Clinton claims that right-wing extremists already have the plan to steal the next presidential election. She said that they are not making a secret of it.

The fundraising video for the organization says that the “steal” would be done by GOP-led state legislatures.

After these wild allegations, Clinton challenged viewers to donate so that they could “crush the coup.” “Indivisible” identified the 29 most critical races in 6 different states that need to be won if they are going to defeat the MAGA coup. These battleground states are Arizona, Georgia, Michigan, North Carolina, Pennsylvania, and Wisconsin.

The “Crush the Coup” (CTC) movement also named Democrats that the group believes need to be bankrolled if they are to be elected. These politicians are set to deal with strategic legislature issues, but they are also going to be focused on handling the fallout since Moore v. Harper, an election redistricting case that will be heard by the Supreme Court.

This case is focused on whether “a State’s judicial branch may nullify the regulations governing the ‘Manner of holding Elections for Senators and Representatives … prescribed … by the Legislature thereof,’ … and replace them with regulations of the state courts’ own devising.”

CTC has promoted the idea, along with others on the left, that if this case leads to adopting a fringe legal doctrine, the court will be giving states power to overturn elections.

Carrie Campbell Severino, head of the Judicial Crisis Network, spoke with “National Review” and said the “alarmism around Moore v. Harper comes from liberals who cherry-pick their grievances in states whose constituents favor Republicans and selectively use liberal activist state courts to give Democrats advantages they cannot democratically.”

She believes that instead of fighting to protect democracy, the CTC and Clinton are helping Democrats to undermine it. She said that their rhetoric is a “con job” that is a part of the Left’s disinformation campaign.

This is the same old, same old for Hillary. In 2002, Clinton publicly claimed former President George W. Bush had been “selected” president, not elected.