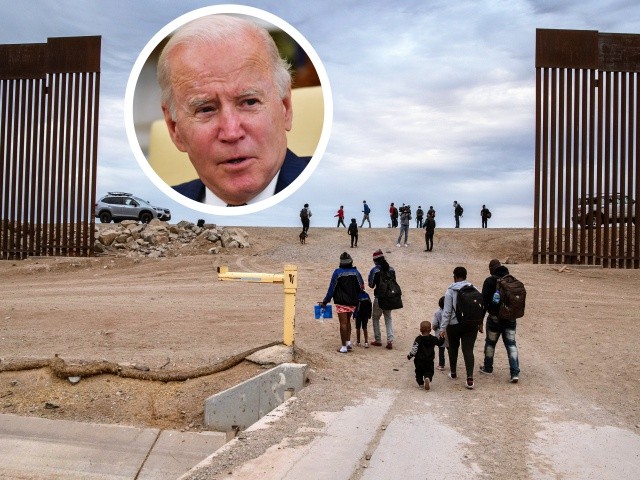 The poll also showed that 59 percent of all voters, and 61 percent of independents, say Democrats will “open the U.S.-Mexican border” if they keep control of Congress in 2023. Twenty percent of liberals and 27 percent of Democrats say their party will open the borders.

The pre-election poll comes after President Joe Biden’s deputies imported at least 3 million foreign workers, immigrants, and illegal immigrants. In 2022, for example, he imported at least seven migrants for every 10 births. Biden’s migration is unfairly pressuring down Americans’ wages. It is also boosting rents and housing prices, and is pushing up inflation for a wide variety of goods, such as used autos and food.

CBS News reported the results of the October 26-28 poll:

Republican messaging on immigration is resonating with some voters. By three to one, [polled] voters think Democrats put the interests of recent immigrants first rather than prioritizing the interests of current U.S. citizens, among those who think the party takes a side between the two. And a majority [of voters] think the Democrats would “open the U.S. Mexico border.” Those holding this view are voting Republican in big numbers.

Fifty-two percent of election-deciding swing-voting independents told CBS that Democrats put immigrants ahead of Americans. So did 10 percent of Democrats and 77 percent of Republicans.

So the federal government deliberately stimulates low-wage business by extracting millions of migrants from poor countries to serve as extra workers, consumers, and renters.

This Extraction Migration policy shifts vast wealth from ordinary people to investors, billionaires, and Wall Street. It makes it difficult for ordinary Americans to advance in their careers, get married, raise families, buy homes, or gain wealth.

Extraction Migration slows innovation and shrinks Americans’ productivity. This happens because migration allows employers to boost stock prices by using stoop labor and disposable workers instead of the skilled American professionals and productivity-boosting technology that earlier allowed Americans and their communities to earn more money.

Many polls show the public wants to welcome some immigration. But the polls also show deep and broad public opposition to labor migration and to the inflow of temporary contract workers into the jobs needed by the families of blue-collar and white-collar Americans.