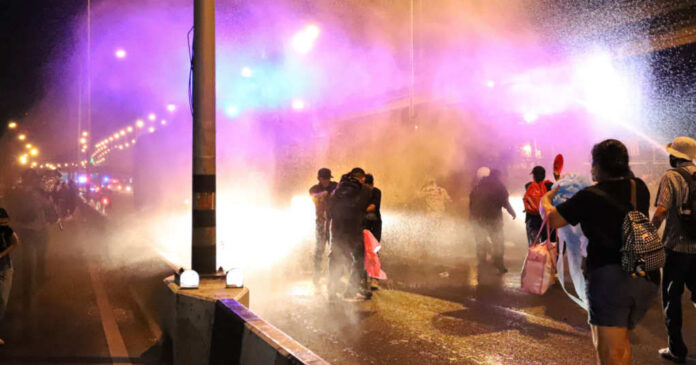 The Democrats love to point the finger and blame the Republicans for violence. And the only thing they have to prove their case is the January 6 “insurrection.” What they don’t understand is that the Capitol riot was a result of extremists – and they most certainly don’t represent the entire Republican Party.

Democrats, on the other hand, have a long history of being violent – and the entire summer of 2020 with the BLM-fueled riots is proof of that.

Even when there is the simplest disagreement, a liberal will often turn toward violence. And that was on full display at Penn State a few days ago.

It all started when Alex Stein was invited to Penn State University to speak at what was billed as a “provocative comedy night” on campus. For those who aren’t in the know, Stein is a right-leaning comedian who is also a Blaze TV contributor. He was invited along with Gavin McInnes, who is the founder of the Proud Boys.

Liberals across the campus protested. If it were just about holding picket signs, that would be one thing. However, it quickly turned violent, and the event had to be canceled.

Stein and McInnes arrived this past Monday so that they could hold the event. It was arranged by a PSU student group. It was also sponsored by Uncensored America, which is described as a “non-partisan organization dedicated to fighting for freedom of speech.”

Let’s break this down – it was sponsored by a non-partisan organization, which meant that the event shouldn’t have gotten political. And the rioters were angry because of what was going to be said at the event – which is literally against freedom of speech.

The protesters had no right to get violent and shut the event down. If they didn’t want to hear what Stein and McInnes had to say, they could have stayed in their dorms. No one was forcing them to attend the event.

And there have been plenty of progressive speakers on campus before – and conservative students simply turned a blind eye to it all.

The mob of angry protesters were hurling insults – and one even spit.

Stein used this to provoke the crowd further because that is what he does. It was clear that the event wasn’t going to move forward at that point, so he ridiculed many of them for their insults. One woman approached him, gave him the middle finger, and said “I f***ing hate you! I hope you f***ing die!”

Charming. And she followed it up by spitting on his suit jacket when he said that she was “a very nice woman.”

Some of the protesters continued on even when the police on horseback tried to calm everything down. Protesters were using pepper spray on everyone, including the police.

Once the event was officially canceled, Penn State’s administration came out to say that they denounced the event from the very start but that they “support the fundamental constitutional right of free speech and free expression of all members of our community.

Neeli Bendapudi, the university president, was quick to blame both sides. She blamed the speakers for the violence that comprised their ability to move forward with the event and the rioters for escalating the protests to violence.

There were no arrests made, but it’s clear who got violent. Republicans use their words while Democrats will resort to violence – and even spitting – when someone has a viewpoint other than their own. And they wonder why there’s a red wave crashing through the nation.