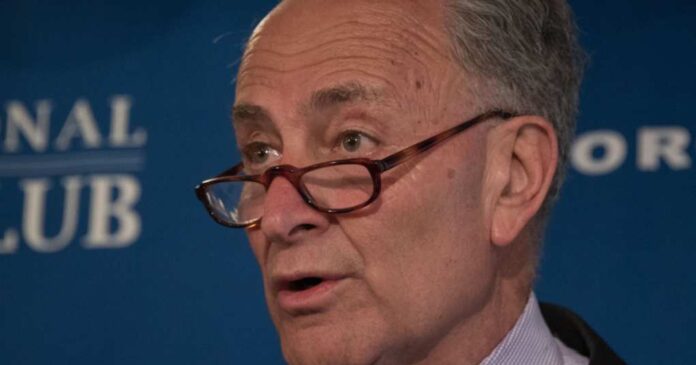 Democratic Senator Chuck Schumer just got into some hot water because he did not realize he was speaking to President Joe Biden with a hot mic on recording his secret words.

Schumer was speaking to Biden on an airfield tarmac Thursday when his comments were caught by a Washington Post microphone. Schumer and the president were standing with New York Gov. Kathy Hochul and Sen. Kirsten Gillibrand, both New York Democrats.

The two liberal men were talking about the state of the upcoming election, and Schumer was caught trying to blow smoke with President Biden.

He was spinning the results of the disastrous debate between John Fetterman and Dr. Mehemet Oz as not very damaging to the Democratic Party in Pennsylvania.

The majority leader not only called the results of the debate totally wrong for Biden, but he also told the president that their party was picking up momentum in Nevada.

The most interesting part of the conversation on the hot mic had Schumer telling Biden that the Democrats were going to have to concede the Georgia senate race.

Schumer said to Biden not knowing people could hear, “It looks like the debate didn’t hurt us too much in Pennsylvania as of today, so that’s good…we’re picking up steam in Nevada…The state where we’re going downhill is Georgia. It’s hard to believe that they will go for Herschel Walker. But our early turnout in Georgia is huge! Huge!” he added enthusiastically.

Where in the world did Schumer get the idea that Fetterman’s terrible debate performance would not hurt Democrats in Pennsylvania? No one anywhere is saying that same thing. There hasn’t been any new polling yet and there is just no way any changes can be determined so quickly one way or another. His take seems like blind hope and desperation to assume PA Democrats are not suffering.

In Nevada, Republican Adam Laxalt is enjoying a firm lead against Democrat incumbent Sen. Catherine Cortez Masto. There is only one poll that is indicating that Masto is winning, and that was done over a week ago. Most experts agree that this one poll was an exception. It is also clear that voter turnout is low in Nevada, this likely signals that Democratic passion with voters probably is not happening. So it is hard to imagine what kind of steam Schumer was talking about.

The message on the hot mic from Schumer about the senate race in Georgia is the most interesting. What he said to Biden sounds good for the GOP, but most believe that it is not true as well. If you go by the polls and the general sentiment surrounding the race, you would get the sense that Sen. Raphael Warnock is still the favorite.

Since Schumer is known for a lot of political money passing through his hands, you would think he would know the ins and outs of the campaign. Could it be that the internal polls in the contested race are worse for Democrats than we have thought? It’s hard to imagine that Schumer would say this to the president if he did not actually believe that Warnock was losing. But he was so wrong about the other information. Let’s hope he really does have some inside information.

It sure does seem like Schumer was just trying to blow smoke and gain favor from Biden.

The GOP is getting ready to win in Pennsylvania and Nevada, and now Georgia could very well be on the table. Let’s hope that Georgia Gov. Brian Kemp really can cast a large shadow.

Maybe we can get some more inside information from the cronies on the left.