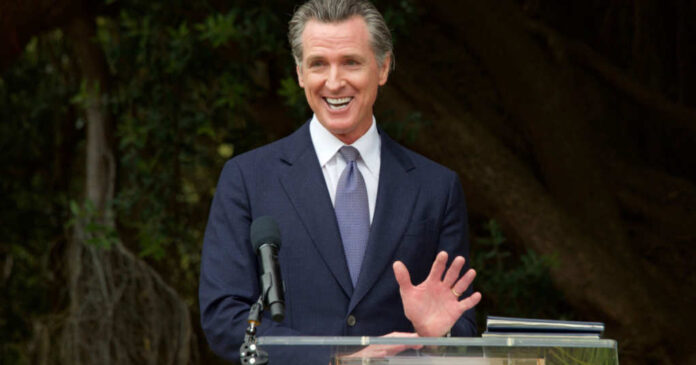 The midterms aren’t even here yet, and many politicians are talking about 2024. The presidential election seems to be up for grabs from both parties because no one wants to see Joe Biden in for a second term. Even if Biden says that he’ll run, there’s no guarantee that the Democratic Party will allow him to do so.

Gavin Newsom, the slick-haired governor of California, has already been eyeing the possibility of running, not that he’d admit it to anyone. He’s even challenged Ron DeSantis, who is also expected to announce a run.

Why else would Newsom be putting billboards in Florida?

If you ask Newsom on the streets if he’s planning on running, you’ll get an adamant “no.”

Is he telling the truth? Probably not. In fact, he’s most certainly NOT telling the truth. He has an entire campaign system in place to help him with a 2024 presidential run. Of course, we’re not supposed to pay any attention to that.

The digital operation that he has going on is massive. It includes large databases of donors and supporters – and Politico has reported that such databases are unusual for a state official to maintain.

If it’s unusual, there has to be another reason for it all. His recall election has also helped him to do some SERIOUS fundraising. Since the attempt at recalling his vote, he’s raised $113 million. Those are serious sums…and as Politico noted, “And they underscore that Newsom has been able to build what few others in the party can lay claim to: a major digital apparatus allowing him to play in 2022 despite mostly staying off the trail until late.”

Tim Tagaris is the one responsible for Newsom’s online footprint. Tagaris, who has also been a part of Bernie Sanders’ fundraising efforts in 2016, started before the recall. He has helped to grow Newsom’s email list from 250,000 to over 6 million.

Newsom has essentially ignored his reelection campaign. He’s not concerned for two reasons. If people wanted him out, they would have voted differently during the recall vote. Secondly, there’s been a mass exodus of homeowners and small business owners, which is considered the Republican base. This means that there is a larger percentage of Democrats sitting in California who actually SUPPORT what the liberal governor is doing.

Rather than campaigning for himself, he’s spent time attacking Republican governors like DeSantis of Florida and Abbott of Texas. And he’s traveled to support other Democrats, including Grisham of New Mexico.

Newsom even traveled to the White House earlier this year while Biden was away. This was all during the time that speculation was high of Biden not running for reelection in 2024.

All signs point to Newsom looking to run for president in 2024. He’s chosen not to focus on his reelection campaign and he’s growing his online footprint, complete with fundraising to help with a national campaign.

We’re not buying it. Newsom has been known to say one thing and do another throughout his entire political career. Just wait until after the midterms are over. Once others have come forward to say that they’ll be running, it’s likely Newsom will announce that he will be, too.

You don’t think he’s going to just sit back and watch DeSantis run without him challenging that, do you?