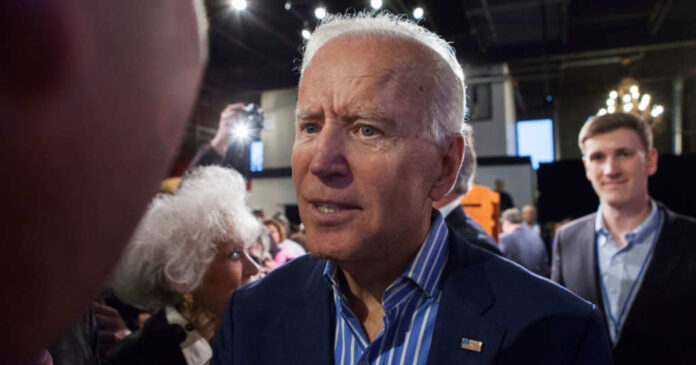 Over the years since Joe Biden announced his presidential candidacy and won the White House, he’s made no small number of grammatical errors, word mishaps, and speech impediments. Those who, with great delusion, support him would say that most are due to him never being all that of a great public speaker, which is only exacerbated by the fact that he had a stutter as a child.

However, for those of us in the know, it’s hard to deny that any else is going on but a man slowly losing his mind to age and dementia. It’s sad to watch, really.

But since he and his staff have thus far refused to participate in any kind of cognitive exams or tests that would confirm such and continue to claim that he is “in good health,” we are all forced to simply do just that.. watch as he crumbles from inside out.

The most recent evidence of this was seen on Tuesday while he was doing some last-minute campaigning for Democrat candidates in Florida.

As you can imagine, current events, including the War in Ukraine and what it has supposedly done to our supply chains, inflation rates, and gas/oil supplies, are mentioned. Or at least that’s what Biden was supposed to be talking about.

Instead, he actually said that there is a war in Iraq going on. Now, to be clear, he did correct himself, but only by then making another false claim – one that his son died fighting in Iraq.

He said, “Inflation is a worldwide problem right now because of the war in Iraq and the impact on oil from what Russia’s doing – excuse me, the war in Ukraine – I’m thinking of Iraq because that’s where my son died because he died.”

To be clear, Joe Biden is no Gold Star parent.

His oldest son, Beau Biden, did, in fact, die. And he did actually go to Iraq. But the two events are separate, at least somewhat. The deceased Biden was a JAG lawyer deployed to Iraq from the Delaware National Guard in 2009. Beau also served as Delaware’s Attorney General.

But he didn’t die until 2015, a total of six years after his deployment in Iraq ended. His death was the result of brain cancer.

Of course, this isn’t the first time Joe Biden has referenced Iraq being the cause of his son’s death over the years. in fact, as late as last month, he mentioned that Beau had “lost his life in Iraq.” This constant referencing of the idea has led more than a few to believe that this can’t really be considered a gaffe or mistake by the senior Biden but rather a full-blown belief.

I know that fact isn’t any more reassuring.

However, before we get too far down the road, let me say there might be at least some small merit to that claim.

As I mentioned, Beau was deployed to Iraq, where it is known that he and thousands more were exposed to military burn pits, according to The Washington Post. Additionally, very real and terrifying, if not fatal, links have been made in recent years to those burn pits and those who were exposed to them. Many Global War on Terror vets have come home with health problems due to such exposure.

So there is a very real possibility that Beau’s death could be directly related to his time spent in Iraq.

However, such a connection was never actually diagnosed or factual. It has always been mere speculation, even if an educated one.

But even if Joe’s son died as a result of his service to our nation, it is not the same as being killed in action. There is a massive difference, although just as tragic.

And that means that Biden has no right to suggest or otherwise give the impression that that’s what happened to Beau, especially since he is the President of the United States, and especially since this was said during a political speech regarding elections. It’s not only not appropriate but a complete disrespect to those who actually have been KIA and their families.

Gaffe or not, it’s further proof that Biden’s mind is no longer fit, if it ever was, for running the Oval Office.