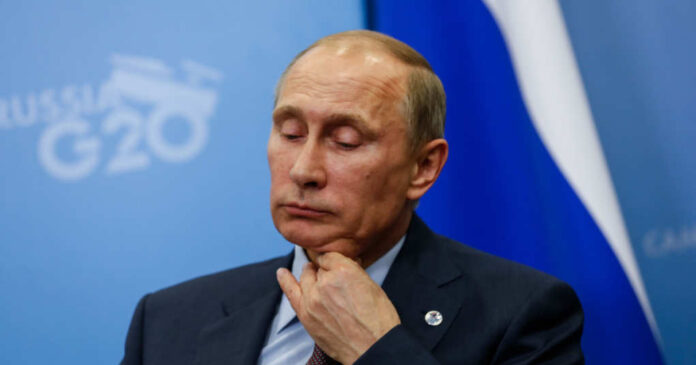 There has been an alleged spy document leaked from Russia that indicates that Russian President Vladimir Putin has early-stage Parkinson’s disease as well as pancreatic cancer.

This is the latest unverified information on the vilified leader’s ill health. There have been rumors circulating about his illnesses for months now and he has been seen regularly twitching and unsteady in the public.

This has created some hope in Ukraine and the West that the dictator might be willing to relinquish his position of power.

Claims have been coming from opposition figures who have focused on his unexplained absences and his shaky public appearances. It’s becoming common belief that he is battling serious health problems but these rumors have been dismissed by the Kremlin.

Now there are emails from a Russian intelligence source that seems to confirm Putin, who is 70, has been diagnosed with cancer and Parkinson’s. This is according to “The Sun.”

The leaked documents allegedly said: “I can confirm he has been diagnosed with early stage Parkinson’s disease, but it’s already progressing. This fact will be denied in every possible way and hidden.”

Putin was recently seen with apparent track marks from IV treatment on the back of his hand. It has also been reported that he is regularly stuffed with heavy steroids and innovative painkillers through injections to stop the spread of cancer in his pancreas. He has pain, and swelling in his face and suffers from memory lapses. There are also rumors that the cancer is not just in his pancreas, but in his prostate as well.

“The Mirror” reported that Putin’s symptoms were a sign of the leader’s rapidly deteriorating health.

“In the past few months, Putin has lost eight kilograms, and those around the president are worried that the thinness and persistent cough that is noticeable in progress will be regarded by the elites as a sign of the leader’s rapidly deteriorating health,” they wrote.

Putin has a history of disappearing from the public eye and the rumor has been it has been health-related. In November 2012 Putin canceled several trips and the meetings shown by the Kremlin were taken previously. In March 2015, Putin once again did not appear publicly and the meeting was pre-recorded but declared to be in real-time. In August 2017, Putin visited Abkhazia and Sochi with journalists, but the week after there were only pre-recorded meetings shown. In February of 2018, right in the midst of an election campaign, the president canceled public events because Putin “had a cold.” And in September of 2021, Putin entered into “self-isolation” and all events were held by video link.

Some of Putin’s relatives have shared concerns about the frequent coughing fits that Putin is having.

At one recent meeting with military leaders, Putin could not continue in the meeting because of an attack of severe coughing. The meeting had to be stopped, and the president needed medical help.

There is also constant nausea and a lack of appetite. Last weekend, he may have undergone a medical examination with his doctors.

Retired British army officer and member of the House of Lords Richard Danatt talked about the issue of Mr. Putin’s health while appearing on a program on Sky News. He told the news outlet that it is important to keep a watch on Putin’s health.

“Keen observers now are noticing that his hands are looking pretty black on top, which is a sign of injections going in when other parts of the body can’t take injections,” Lord Dannatt told the outlet.