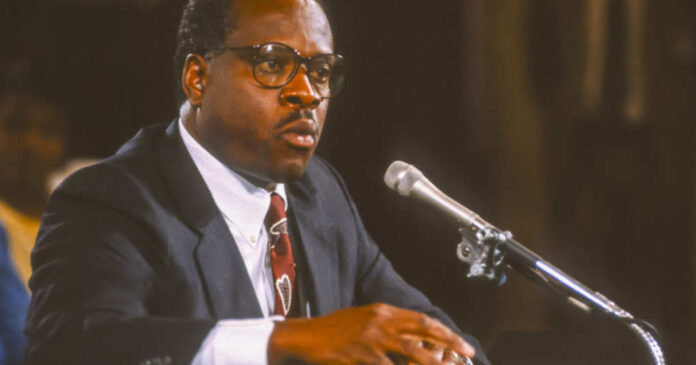 If you know much about Supreme Court Justice Clarence Thomas, it’s likely that he’s become quite the target for liberal hacks and activists over the years, thanks to his strong convictions and moral code. Unlike no small number of GOP lawmakers and court members, he’s not so easily swayed on much.

And he’s also not afraid to let everyone know it.

Most recently, that trait has manifested itself in a case regarding the use of affirmative action by elite colleges and universities throughout the nation. And Thomas’ comments on the subject suggest that another major Supreme Court decision could soon send the country into unprecedented territory.

This week, the Supreme Court heard two separate cases put forward by Students for Fair Admissions, who are challenging the right colleges like the University of North Carolina and Harvard have to use the process of affirmative action.

If you are unfamiliar with that term, affirmative action is basically the practice of using selective and favorable treatment to students of a specific race, background, or other demographic to supposedly achieve what they call a more “diverse” student body.

This means doing things like waiving low test scores or ignoring a student’s failing grades simply because that student’s race or background might make the population of the school more diverse.

As you can imagine, the practice is not all that popular with everyone. After all, it’s giving favor to students who have not only not earned admission to college in the same way as other students, but it teaches them a sense of false entitlement, as if they deserve something simply for being a certain race or religion, etc.

However, the practice has been used by US colleges for quite some time now, thanks to several rulings by the Supreme Court that it does not violate the 14th Amendment, as decided in a 2003 case, and another heard by the High Court in 2016.

In both cases, Thomas was not for the practice and noted as much. In the 2003 case, Grutter v. Bollinger, he even accused the University of Michigan of granting “exemptions to favored races.”

However, he was overruled when more of his colleagues disagreed with him than had the same mindset.

But that doesn’t mean his mind has been changed on the matter since then.

Of course, as a Supreme Court justice, Thomas can’t simply rule against something just because he doesn’t like it. Instead, his job is to rule on it according to the laws and regulations of the land and the Court.

More specifically, it is his job to help determine if it is constitutional or not.

And so the court is hearing arguments from both sides.

To help make a more informed decision, Thomas asked North Carolina Solicitor General Ryan Y. Park what his definition of diversity was and why having a more “diverse” group of students was better for the school.

Park responded that diversity is a “broadly diverse set of criteria that extends to all different backgrounds and perspectives and not solely limited to race.” As for what it does for the college, he claimed that “racially diverse groups” are better suited to making better decisions.

According to him, having more people of a diverse set of characteristics leads to “longer and more sustained disagreement,” which then leads to “more efficient” outcomes.

To be sure, I’m not sure that Thomas or I can actually disagree with Park. According to the latter, studies prove it.

However, as Thomas so boldly and honestly point out, “similar arguments in favor of segregation” have been heard by the court. So what are Thomas and his colleagues to believe? Does a more diverse population make better decisions, or does a more closed-off one?

Naturally, for most, it comes down to sheer opinion. Additionally, given the litany of studies and research projects out there, I bet that, given either view, a few studies can be found to supposedly support it.

The question for Thomas and his co-workers now will be to decide which is the most believable and which do they feel aligns more with Constitutional law.

And given that the High Court is now made up of more conservative justices than liberal ones, affirmative action, like abortion, in the US could soon be overturned. Again, it won’t make Thomas any more liked by the liberal leaning left.

But I doubt that bothers him much.