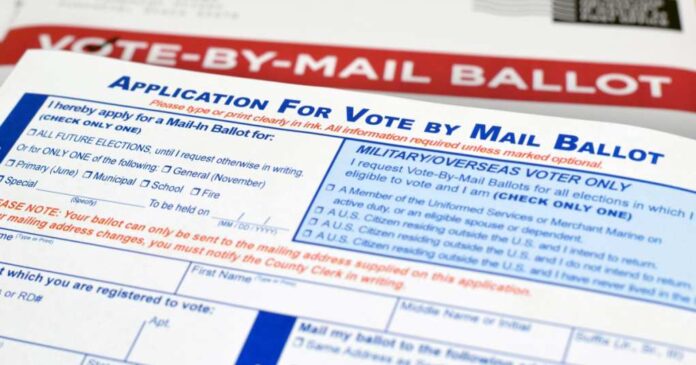 The Democrat Party has been caught red-handed in New Hampshire carrying out what appears to be an elaborate ballot harvesting operation. The New Hampshire Department of Justice says this scheme impacted at least 34 cities across the state. New Hampshire’s Attorney General says this operation sowed confusion among voters but isn’t going into specifics about how they caught them. The state’s Democrat Party was mailing phony absentee ballot applications to people. Instead of arresting anyone for obvious election fraud, the New Hampshire DOJ has instead sent a cease-and-desist letter to the Democrats. So that’s typical.

Here’s how this scheme was being carried out, according to the New Hampshire DOJ.

The New Hampshire Democrat Party mass-produced a bunch of fake absentee ballot applications. Those applications were then sent to voters with an explanatory letter from the party. The letter states, “You have a history of requesting absentee ballots,” even though in many cases these voters have never requested on.

The letter then explains how to fill out an enclosed absentee ballot request form. The request forms are real, by the way. Each letter also includes a postage-paid envelope to mail the absentee ballot back in. But the postage-paid envelopes were all addressed to “[County] Board of Elections” at a generic PO Box. The letters also list incorrect domicile addresses for the voters.

New Hampshire does not have county boards of elections. Even if they did, those boards wouldn’t have a generic PO Box for people to mail in their absentee ballot requests. You can read a copy of one of these fake mailers HERE.

Pause for a second and try to come up with a reason why the Democrat Party in New Hampshire would be doing this. Is there an excuse that does not involve fraud? If there is, we’re all ears. Because it sure sounds like the Democrats are trying to get voters to send an authentic absentee ballot request form to a fake address so that the application can then be used to get an absentee ballot sent to an incorrect domicile address.

These letters were sent to voters in 34 cities across New Hampshire and were mailed to them just days before absentee ballots were about to be sent out. They were obviously hoping that people would think, “Oh, I can get an absentee ballot last minute!” and not look too closely at what was going on. The absentee ballots would then be mailed to the incorrect addresses so that Democrats can be sure that the ballots are filled out for the “correct” candidates. Democracy in action!

It’s convoluted, but it would have worked. It’s certainly a more involved plot than the stunt that Congresswoman Ilhan Omar’s (D-MN) campaign got caught pulling in 2020. Her campaign staffers waited by banks of mailboxes when absentee ballots were sent out and simply paid people cash in exchange for signed, but otherwise-not-filled-out ballots.

The question is why is the New Hampshire Attorney General not taking a more aggressive approach to this? This was an obvious crime, carried out using a federal agency (the postal service) to commit election fraud. At a bare minimum, the Democrats have been caught committing straight-up mail fraud. But instead of arresting anyone, the DOJ has sent a cease-and-desist letter to the Democrats, telling them to stop sending out the fake mailers. The DOJ is also ordering the Democrats to submit a remediation plan describing how they’re going to notify all the voters they sent these fake mailers to.

Here we have direct evidence of the Democrat Party committing mass election fraud, and no one is getting arrested for it, and law enforcement agencies won’t even call it a crime. That sounds familiar for some reason…