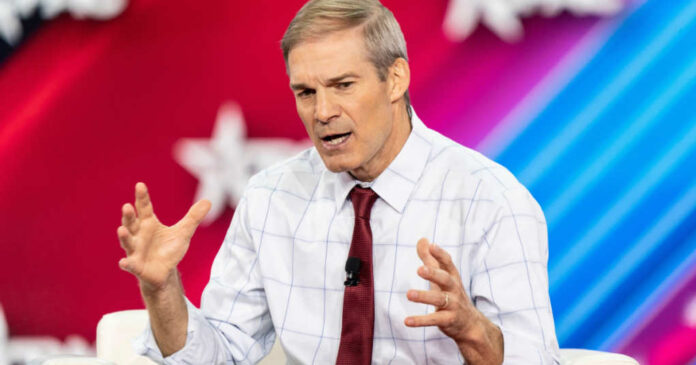 Republicans led by Rep. Jim Jordan (R-OH) on the House Judiciary Committee released a bombshell report on the FBI and the Department of Justice last Friday. The 1,000-page report outlines the extreme partisanship, corruption, misdeeds, and illegalities that the FBI has been displaying for years now.

This is a step in the right direction because Jordan is signaling much deeper investigations and major reforms at what is currently the most corrupt agency in the federal government. And that move also means that Jordan is now officially in the running to be the next Speaker of the House, instead of Rep. Kevin McCarthy (R-CA).

Most of the materials in Jordan’s report were already publicly known. The FBI is using illegal tactics to target, harass and terrify Trump supporters who question the fake 2020 election results. They’re targeting parents who are opposed to woke school boards.

They started spying on Donald Trump when he was a candidate for president back in 2015 (before he was even the Republican nominee in 2016) and never stopped. The FBI is still spying on President Trump as of today, per the Mar-a-Lago raid over some paperwork BS.

The FBI lied for years, claiming publicly that it did not have Seth Rich’s laptop. Seth Rich was the DNC staffer who provided the non-hacked DNC emails to WikiLeaks and was then murdered 3 days later in one of the wildest coincidences ever involving Hillary Clinton. When it was finally revealed through a court order that the FBI did in fact have Seth Rich’s laptop, despite the fact that it was a DC homicide case and not a federal case, the FBI asked the court for 66 years to publicly release the contents.

Likewise, the FBI lied about Hunter Biden’s laptop, which revealed that the First Son was committing multiple federal felonies. They said the laptop was “Russian disinformation” and they said it right before the 2020 election, to tamper with the outcome of that race. Hunter Biden committed federal felonies ON VIDEO on that laptop. We’ve all seen the videos.

Aside from the Biden family’s pay-to-play schemes that impacted foreign policy, Hunter Biden is shown committing federal drug felonies and federal human trafficking felonies with prostitutes on those videos. Raise your hand if you think there is NOT a dead hooker scandal hidden in Hunter Biden’s closet, which the Chinese are holding over Joe Biden’s head. Anyone? No?

And yet Hunter Biden’s front door has not been kicked in by an FBI SWAT team. There’s no indictment, and we all know there never will be. That’s because the FBI has become one of the most corrupt federal institutions in American history.

The FBI stalked a GOP congressman while he was on a family vacation and stole his cell phone from him. They also cornered Mike “Pillow Guy” Lindell in a drive-through to steal his cell phone. And they won’t release the search warrant affidavits in either of those fake cases. All they’re doing is intimidating Trump supporters – or trying to.

There’s also some new information in the report. For example, Attorney General Merrick Garland is firing any FBI agents who hint at being opposed to the Biden regime’s Diversity, Inclusion, Equity (DIE) agenda. The bureau is also purging any agents with even slightly conservative political leanings.

The good news in all of this is that by shedding sunlight on this corruption, Jim Jordan’s stock is suddenly rising among the rank-and-file GOP. Reports indicate that Jordan is going to be nominated to challenge Kevin McCarthy for the House Speakership. That’s a good thing since McCarthy has indicated that the GOP, under his leadership, will not be impeaching anyone from the Biden regime. Jordan says otherwise, and that’s great. These partisan federal agencies need to be reformed at a bare minimum after mass firings take place, if not completely uprooted and destroyed.