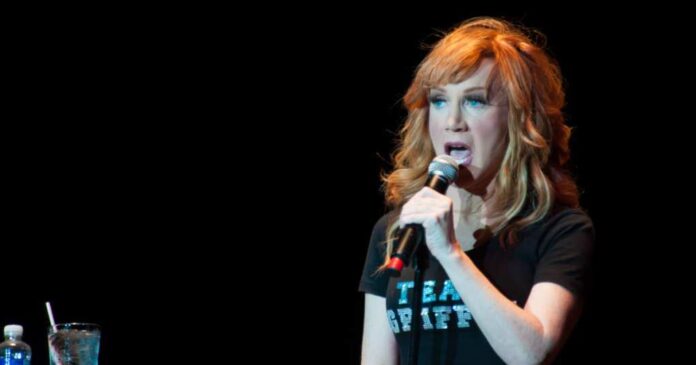 Kathy Griffin is a comedian, but not even a good one. She’s been in the semi-spotlight for over 20 years, though if you’re not a liberal, you may not have even heard of her. She’s always made it a joke that she’s on the D-list. But, it’s probably not that far from the truth. She’d rather laugh about it than accept it for the hard truth that it is.

If you have heard of Griffin, it’s probably because of her stunt a few years ago where she held a bloody Trump head effigy in her hand and shared it across social media.

It was considered to be a death threat against the sitting president, which meant that she had to get investigated by the Secret Service. In the end, it was accepted as her version of humor.

She has decided to get upset about Twitter’s new rules. More specifically, she’s targeting Elon Musk because he has the audacity to charge $8 a month to those who want a blue checkmark.

Rules are rules – and it’s important to have rules so that there’s no funny business going on.

And since Griffin thinks that she’s the queen of funny business, she thought it would be fun to impersonate Elon Musk on Twitter. It got her kicked off the platform.

Obviously, she never learned her lesson after the Trump effigy. So, she’s throwing a full-blown temper tantrum that she’s been kicked off the platform. And yet, it doesn’t even stop there.

It’s also helped Musk to realize that Twitter needs to have a clear rule. “Any Twitter handles engaging in impersonation without clearly specifying “parody” will be permanently suspended. That sounds reasonable enough.

Musk has also decided to keep his sense of humor about all of it. He quipped that she was “suspended for impersonating a comedian.” She got fired up, which was entirely predictable.

She yelled at him that he stole the joke since people had been posting that for hours. She said “Look, please do a better job running this company. It used to mean something.”

So, he’s been running it for all of about a week now? He’s got plenty of time to get things to where it needs to be. As for how Twitter “used to mean something,” that’s questionable. It was a liberal playground where the left could say whatever they wanted, and the right would get fact-checked or kicked off the platform for saying something that hurt the left’s feelings.

Musk doesn’t have very big shoes to fill. He’ll do a much better job running it than Jack Dorsey ever dreamed of doing.

The drama is continuously unraveling because Kathy Griffin is incapable of letting things go. She’s using her dead mother’s handle, which is @TipItMaggieG. The only reason Musk hasn’t banned that one, too, is likely because he’s amused. He loves to troll those who get mad at him, which can be seen with his Twitter feud with AOC. #FreeKathy is the hashtag that Griffin is using, too, as a way to request that her account be reinstated.

It’s kind of funny that she cares that much. Many Democrats are simply saying that they won’t use Twitter anymore now that Musk has taken over. Or is that like when they all threatened to move to Canada if Trump got elected?