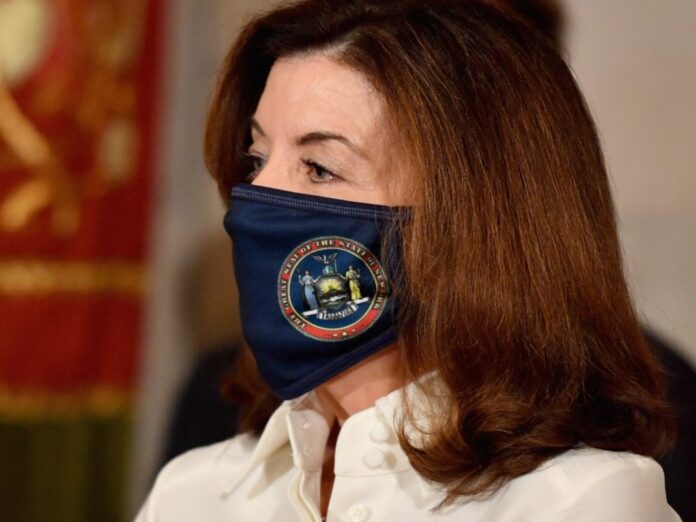 Hochul, who narrowly defeated Republican challenger Rep. Lee Zeldin (R-NY) in the Empire State’s gubernatorial race, is attending the SOMOS conference in Puerto Rico. The New York Post described the conference as a “five-day sun-soaked getaway for Albany lawmakers and lobbyists to maneuver and get facetime with one another at conferences, parties and the beach.”

“With one of the largest Puerto Rican populations in our nation, New York has a rich history and a long connection with the people of Puerto Rico,” the Democrat said in a statement.

“By designating November as Puerto Rican Heritage Month, we are honoring and celebrating the longstanding contributions of Puerto Rican communities across the state in all areas – business, arts and culture, science and technology, athletics, public service, and more,” she added:

However, that aside, an unmasked Hochul visited with students on the island and could be seen smiling and clapping gleefully around children, many of whom remained masked:

The clip is reminiscent of twice-failed Georgia gubernatorial candidate Stacey Abrams’ viral moment this year after smiling ear to ear while surrounded by children who still had masks on:

Hochul’s seeming approval of mass masking of children still comes as no surprise, as she did not even announce a plan to end state mask requirements for New York schools until the end of February of this year, after months of pro-mask policies under former Gov. Andrew Cuomo (D).

Further, Hochul recently expressed her approval of masking small children mere weeks ago, urging parents to re-mask their toddlers to protect them from RSV (respiratory syncytial virus). Hochul contended that it would not harm children, as they are already conditioned to mass masking.

“Infants as young as six months old have been known to contract this. It’s hard to keep kids safe. Think about the fact that a year ago, before a year ago, a lot of kids were wearing masks in a daycare center or in schools and that did give them some level of protection,” Hochul said, failing to mention the studies showing that cloth and surgical masks were not effective at blocking exhaled aerosols. She also did not mention the fact that Dr. Anthony Fauci himself admitted in February 2020 that “the typical mask you buy in the drug store is not really effective in keeping out virus, which is small enough to pass through the material.”

“We’re not mandating this,” she said, but she made it clear that she is strongly recommending parents remask their toddlers.

“What we’re saying, parents, you know, other kids, you got kids in school, preschool and got a baby at home, you really might just want to take these extra precautions,” she said, contending that children are already used to wearing masks due to the Chinese coronavirus pandemic.

The Democrat, who made the remarks in late October, added that children are “more socialized to the idea of wearing a mask,” dismissing concerns of what mass masking has done to childhood development.

“It’s not as strange to them. It’s not as if, ‘What is this all about?’ There’s a lot of cute masks out there; I’ve seen a lot of them. So that’s something I’m encouraging all parents to consider for their children right now,” she added.