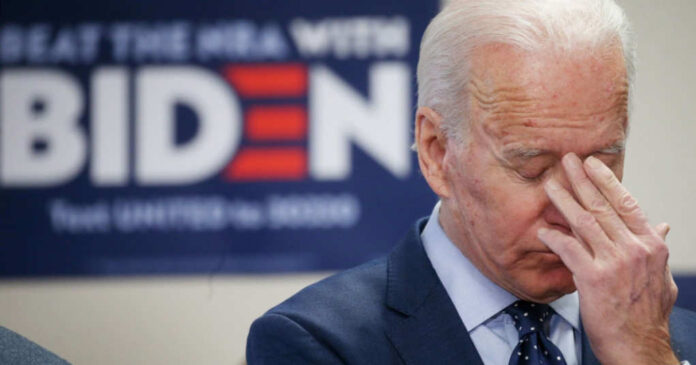 The Saturday essay — titled “Biden was a drag on the Democrats in the midterms: He’d be a disaster in 2024” — was penned by frequent Salon contributor Norman Solomon, who founded the Institute for Public Accuracy (IPA), which is reportedly funded by George Soros’ Open Society Foundations.

“Momentary good feelings are understandable, but Biden was the biggest negative for Democrats. It’s time to move on,” the essay’s subheading reads.

The author begins by asserting that “no amount of post-election puffery about Joe Biden can change a key political reality: His approval ratings are far below the public’s general positivity toward the Democratic Party.”

“Overall, Democrats who won in the midterm elections did so despite Biden, not because of him,” Solomon writes.

“He’s a drag on the party, a boon to Republicans, and — if he runs again — he’d be a weak candidate against the GOP nominee in the 2024 presidential campaign,” he added.

Citing an NBC News Tuesday exit poll that found two-thirds of voters “do not want Biden to run for president again in 2024,” the author claimed the fact is “nothing new.”

“Biden’s low public-approval ratings have been longstanding,” he writes, adding that the “gap between Biden’s approval ratings and those of his party underscores what a massive drag he is on Democratic electoral prospects.”

Solomon also slammed the president for offering a “willingness to compromise with the right-wing Republican leadership” given that bipartisanship is “exactly what we don’t need, in the face of extremist Republican demagogues who are determined to keep dragging the goalposts — and the country — further rightward.”

He then calls attention to a recent Politico assessment of Biden’s impacts on the midterms which “contrast to the current fad of adulation for Biden” in a good part of corporate media:

“It’s hard to argue that Democrats overperformed on Tuesday because of Biden rather than in spite of him,” the article states. “His approval rating, hovering around 41 percent, is dismal — and has been all year.”

“He’ll turn 80 this month, and earlier this year, a majority of Democrats polled said they’d prefer someone else to be the party’s nominee,” it added.

Solomon called it “crucial” to boost pressure on President Biden in the coming months to “step aside,” and consequently has joined the organizing team of the “Don’t Run Joe” campaign by progressive Democrat group “RootsAction,” which urges the Democratic Party not to nominate President Biden for reelection in 2024.

Calling for “grassroots activism,” the author concludes by asserting that Biden “should not be the Democratic Party’s presidential nominee,” and if he were to run for reelection, “the outcome will likely be disastrous.”

The piece comes as polls show Democrats don’t want the president to run again in 2024.

Some have pointed to the president’s advanced age and dismal approval ratings, while others have alleged he lacks a “consistent tone of anger and outrage” over what is at stake during the current moment in American politics.

On Wednesday, New Hampshire Democratic State Representative Sherry Frost expressed her lack of confidence that Biden is the “leader we need to take us into the next term,” adding that “someone else” is needed to “champion the big and systemic changes we need to continue to strive toward our more perfect union.”