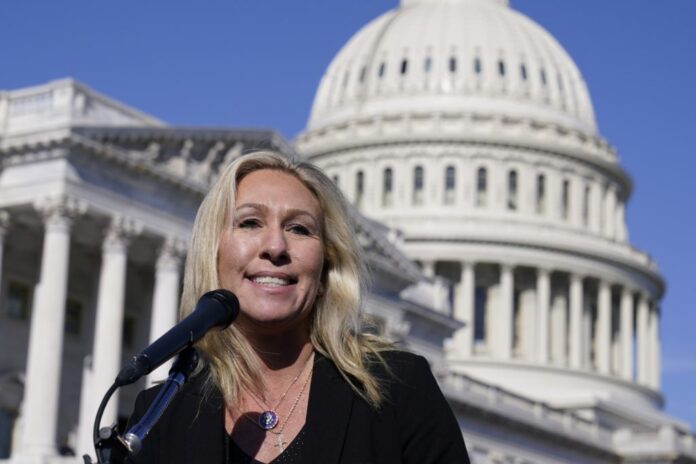 In response to the reports of Rep. Andy Bigg (R-AZ) possibly challenging McCarthy for the speakership, Greene said during an appearance on Steve Bannon’s War Room podcast, “I actually think that’s a bad strategy when we’re looking at having a very razor-thin majority, with potentially 219 [seats], we’re talking about one vote.”

Greene also warned that “RINO” Republicans that are still in the House could join the Democrats in electing so-to-be former Rep. Liz Cheney (R-WY) — a frequent critic of former President Donald Trump — to the speaker position since only 218 votes are needed.

“It’s very, very risky right now to produce a leadership challenge, especially for speaker of the House, when they are going to open the door and allow Liz Cheney, possibly, to become Speaker,” Greene said on the podcast.

“There are Republicans in our conference right now that would make a deal with the Democrats and cross over. We’ve already seen the former Republican vice president of the United States daughter do it,” The Peach State congresswoman explained.

“Do we want to watch a challenge for speaker of the House simply because the ‘Never Kevin’ movement — just like we’ve seen a ‘Never Trump” movement — do we want to see that challenge open the door to Nancy Pelosi handing the gavel to Liz Cheney,” Greene questioned.

This all comes as the latest House projection from far-left NBC News on Monday said the Republican Party will narrowly win a majority in the U.S. House. NBC projected that the narrow margin would be 219 to 216, with the majority being anything over 218.