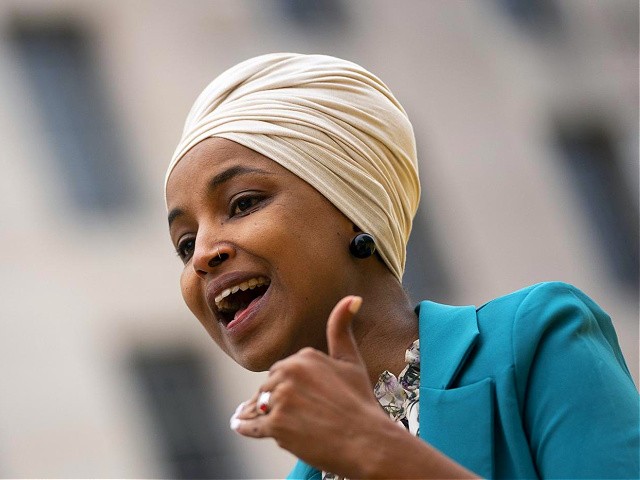 “From the moment I was elected, the Republican Party has made it their mission to use fear, xenophobia, Islamophobia, and racism to target me on the House Floor and through millions of dollars of campaign ads,” she claimed in a lengthy statement after McCarthy renewed his “promise” to bar the congresswoman from committees.

McCarthy, who the House Republicans nominated to be speaker of the House, initially told Breitbart News in an exclusive interview last January that he would strip Omar of her committee assignment on the House Foreign Affairs Committee as well as Reps. Adam Schiff (D-CA) and Eric Swalwell (D-CA) of their assignments on the House Permanent Select Committee on Intelligence (HPSCI).

The Republican leader renewed his pledge this past weekend during an appearance on Fox News’s Sunday Morning Futures.

As the Hill noted, Omar has long been critical of Israel in addition to the county’s actions in the occupied Palestinian territories, which has caused her to receive criticism from her own party.

Whether it is Marjorie Taylor Greene holding a gun next to my head in campaign ads or Donald Trump threatening to “send me back” to my country (despite the fact that I have been a proud citizen of the United States for more than 20 years), this constant stream of hate has led to hundreds of death threats and credible plots against me and my family.

At the same time, they have openly tolerated antisemitism, anti-Muslim hate and racism in their own party. Newly elected Whip Tom Emmer said prominent Jewish Democrats “essentially bought control of Congress.” And McCarthy himself accused Jewish Democrats of trying to “buy elections.”

Instead of doing anything to address the open hostility towards religious minorities in his party, McCarthy is now lifting up people like Marjorie Taylor Greene, Emmer and so many others. If he cared about addressing the rise in hate, he would apologize and make sure others in his party apologized.

Omar claimed that the only thing McCarthy’s “threat” does, is to “gin up fear and hate against Somali Americans and anyone who shares my identity, and further divide us along racial and ethnic lines.”

“It is a continuation of a sustained campaign against Muslim and African voices, people his party have been trying to ban since Donald Trump first ran for office,” she added.