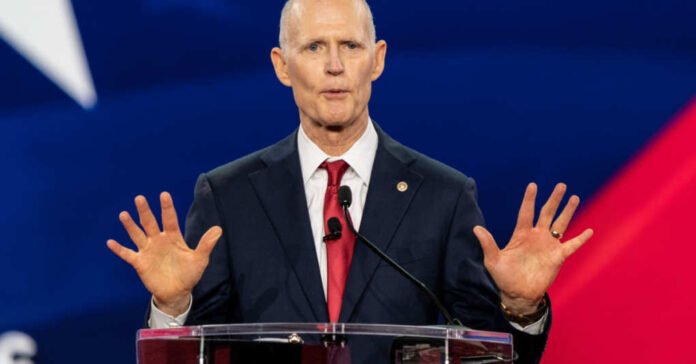 Florida Senator Rick Scott is piling on with criticism against Senate Minority Leader Mitch McConnell. He is not happy with how the 2022 midterms have played out for the GOP and he is not afraid to pin the tail on the elephant leader.

Scott was asked whether he was planning on challenging McConnell for the Leader role of a new Minority or Majority, but he was not willing to answer. He just said that he wanted to focus on moving forward.

Larry Kudlow: “Are you yourself backing Mitch McConnell? I don’t recall.”

Sen. Rick Scott: “I want to focus on how do we go forward.” pic.twitter.com/jbuG1DW0Yt

Larry Kudlow asked: “Are you yourself backing Mitch McConnell? I don’t recall.”

Sen. Rick Scott: “I want to focus on how do we go forward.”

But something has changed in Scott’s heart on this matter. Now he has decided that “going forward” needs to start with a change at the top.

Fox News reported that Sen. Rick Scott is running to unseat Minority Leader Mitch McConnell as the top GOP leader in the Senate. He made this announcement in a note to Republican colleagues on Tuesday, according to information obtained by Fox News Digital.

The Republican senator from Florida is the chairman of the National Republican Senatorial Committee. He has been at odds with McConnell, R-Ky., for most of this year over the party’s political strategy.

Scott is more closely aligned with former President Donald Trump, who has challenged McConnell to be removed as the GOP leader in the Senate.

Scott never ruled out challenging McConnell over the last few months, but he didn’t confirm his intentions until this week during a closed-door GOP lunch.

He wrote a three-page letter to his Republican colleagues in which he stated that it was time for the Senate Republican Conference to be far bolder and more resolute than they have been in the past.

He wrote, “We must start saying what we are for, not just what we are against. I do not believe we can simply continue to say the Democrats are radical, which they are. Republican voters expect and deserve to know our plan to promote and advance conservative values.”

This is a crucial move for the party, there is no way they will win over Generation Z just by communicating that they are not as bad as Democrats. They won’t even be able to retain their base and certainly won’t draw in new voters to the party.

Scott has the credentials to make an impact as the head of the National Republican Senate Committee (NRSC). He has substantial power and a real connection with state and local party leadership. He also has a close relationship with both former President Trump and Florida Gov. Ron DeSantis.

Both of these men are thought to be running for president in 2024.

If Scott is the Senate leader, he would be a key ally in the fight for the GOP primary. And Trump has already burned his bridge with McConnell, so Scott would be a bonus for him and the whole party.

Nobody should count McConnell out yet, his Senate Leadership Fund is pouring $14.2 million into ads for the runoff election in Georgia. And he has very deep roots in D. C. That go back to the early 70s when he was the Deputy United States Assistant Attorney General in the Gerald Ford administration.

He will not lay down in any challenge he hasn’t even been challenged in the Senate since 2006. The senator from Kentucky has a long memory and has played the political game for a long time.

It’s McConnell who gets credit for his strategic placement of judges and ensuring that Supreme Court nominees were originalists and not activists. He gets the credit for Justices Brett Kavanaugh, Neil Gorsuch, and Amy Coney Barrett.

And McConnell can also take credit for seeing that Merrick Garland isn’t sitting on the High Court. With all that he’s done in his present position, can you imagine what he would be like on the Supreme Court?

If Scott continues in his effort to displace McConnell, he better be building up some protections.